Use the Names of Jesus to Worship Christ this Christmas Season 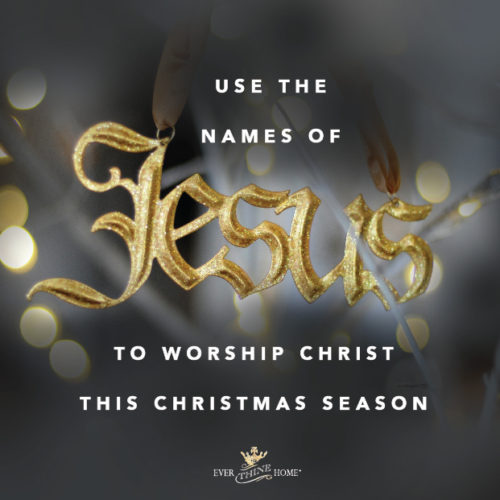 In the beginning God created and He named. He named the darkness “night” and the light “day” (Genesis 1:1-5). He called the dry land “Earth,” the waters “Seas” and the sky above “Heaven” (Genesis 1:6-9). He created the sun, the moon, and the stars, giving each one its name.

Children learn at a very young age that the warm yellow ball in the sky is called the sun. That is its name. As they grow older they learn more about its properties, its size, and its effects on the earth and even on their own bodies. Their knowledge of the sun develops and expands.

Like the sun, each of us is known by our name. Meaning is inherent in a name, giving identity to an object or a person.

In the Scriptures, Jesus is known by many names—some scholars say as many as 300—which tells us right away that He is not like us. Getting to know the names of Jesus introduces us to who He is. It’s the starting place for discovering the greatest treasure, a relationship with the eternal God. In learning the names of Christ, our understanding of Him grows. We begin to know Him as He is. 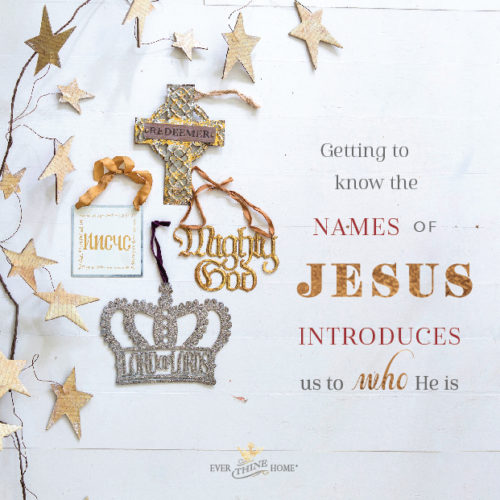 The celebration of Christ’s birth has gotten lost in a swirl of fairy tales and merchandizing. Think about it … the stunning miracle of God becoming human has become trivialized with toys, tinsel, and visits with Santa.

What’s the solution for you and your family? The Bible tells us: “Fixing our eyes on Jesus” (Hebrews 12:2, NASB). Learn His names and in doing so you will know more of Him. Seeing Jesus stirs a response of adoration and worship. And the things of earth become less important. Our misplaced affections are righted.

The Advent names of Christ

As we move closer to Christmas day this week, I’ll be sending you four short blog posts as daily devotions. Each post will feature one of four names of Christ: Light of the World, Messenger, Son of God, and Word. Each of these names is connected with the Advent of Christ, the coming of Christ.

God sent His Son into the world to help us know Him better and to set us free from the darkness of our hardened hearts. One of my favorite stories is the C.S. Lewis book, The Lion, the Witch, and the Wardrobe. The setting is a snowbound country called Narnia that had not known Christmas for a very long time. A young girl, Lucy, stumbles into this magical land and encounters a faun, a kind creature she’d never seen before. After proper introductions, Mr. Tumnus invites Lucy to tea, and she accepts.

As they chat by a fire, her curiosity grows about this very different land which she had unexpectedly discovered. But Mr. Tumnus’ answers to her questions begin to make her feel afraid, especially when he explains matter-of-factly that his wintry country is ruled by the White Witch. “It is she that has got all Narnia under her thumb,” he tells Lucy. “It’s she that makes it always winter. Always winter and never Christmas; think of that!”

Lucy replies, “How awful!” And we would all agree.

Like the imaginary land of Narnia, frozen by the evil spell of the White Witch, so this globe of ours became locked in a kind of perpetual winter the moment Adam and Eve disobeyed God. Their hearts, and the hearts of everyone born after them, were hardened with sin.

For thousands of years the world waited for Christmas to come.

As the years went by, God sent messages to His people to let them know He had not forgotten them, that He would change their hearts, that He would come to them. He gave them hope that one day a Messiah would come. One of His prophets, Ezekiel, famously quoted God saying to His people, “I will remove the heart of stone … and give them a heart of flesh” (Ezekiel 11:19).

When Jesus was born the Light of the World broke through our winter. Christmas was born and angels sang when the Gift of Jesus arrived from heaven and lay peacefully in a feeding trough.

At last, our personal darkness was shattered with bright rays of hope.

Christmas is about each of us; it’s about the whole world. God’s love never ends and it is always enough for any person who will seek Him. 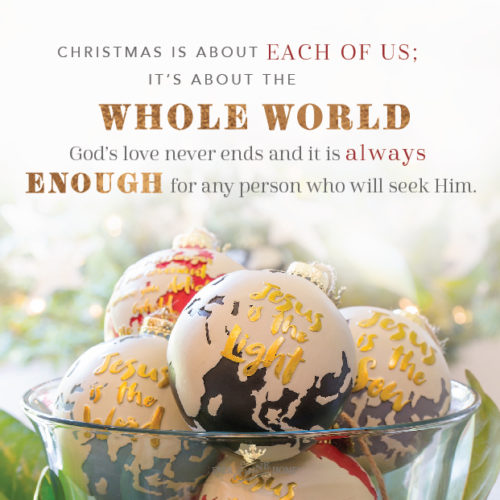 Get to know Jesus

Each of the Advent names of Christ speaks to some aspect of His coming and His purpose.

Consider using the four blog posts to make a weeklong focus on getting to know Jesus. And you might even read each post to your family over dinner and talk about why that name of Jesus is important and what it tells us about why God sent His son over two thousand years ago. Perhaps you could to memorize the key Bible verses as a family or write them on cards and hang them prominently in your kitchen or on your Christmas tree.

For teens and adults, use questions like this to spur some discussion:

May His names be remembered in your family this Christmas—and beyond—as you give prominence to the One whose birth we celebrate on December 25 … the Savior of the world, Jesus Christ!