In This World We Will Have Trouble … but There is Hope 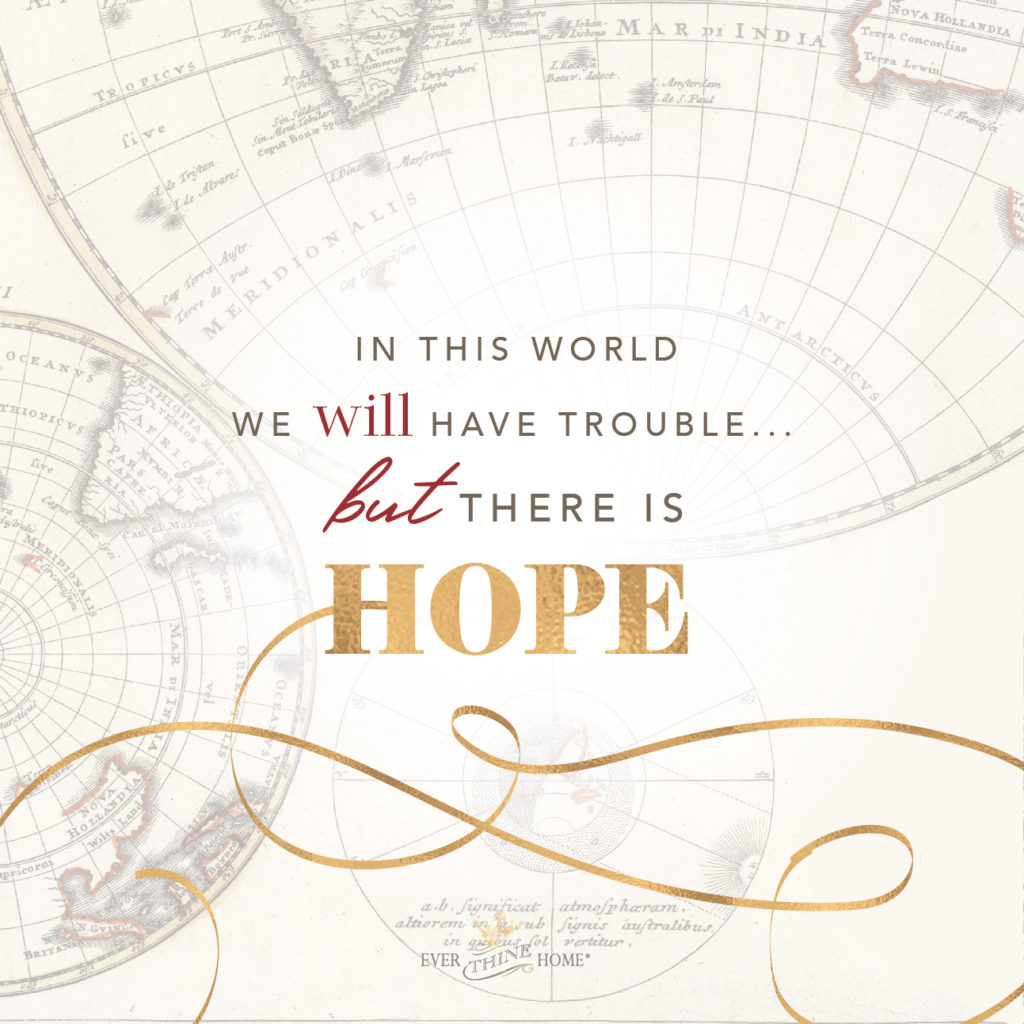 All too frequently I wake up in the middle of the night and can’t go back to sleep. A week ago at 3:30 a.m. my brain started firing about the condition of our world. I didn’t ask for this, didn’t want it either, but it’s what my inner being was processing and it bubbled to the top.

Fear about our future is everywhere. Though I try hard to avoid hearing or reading too much bad or sad news, it still creeps in.

As I lay on my back, eyes on the ceiling, I remembered a promise Jesus made to me, to us:

“In the world you will have tribulation, but take courage; I have overcome the world” (John 16:33 NASB). 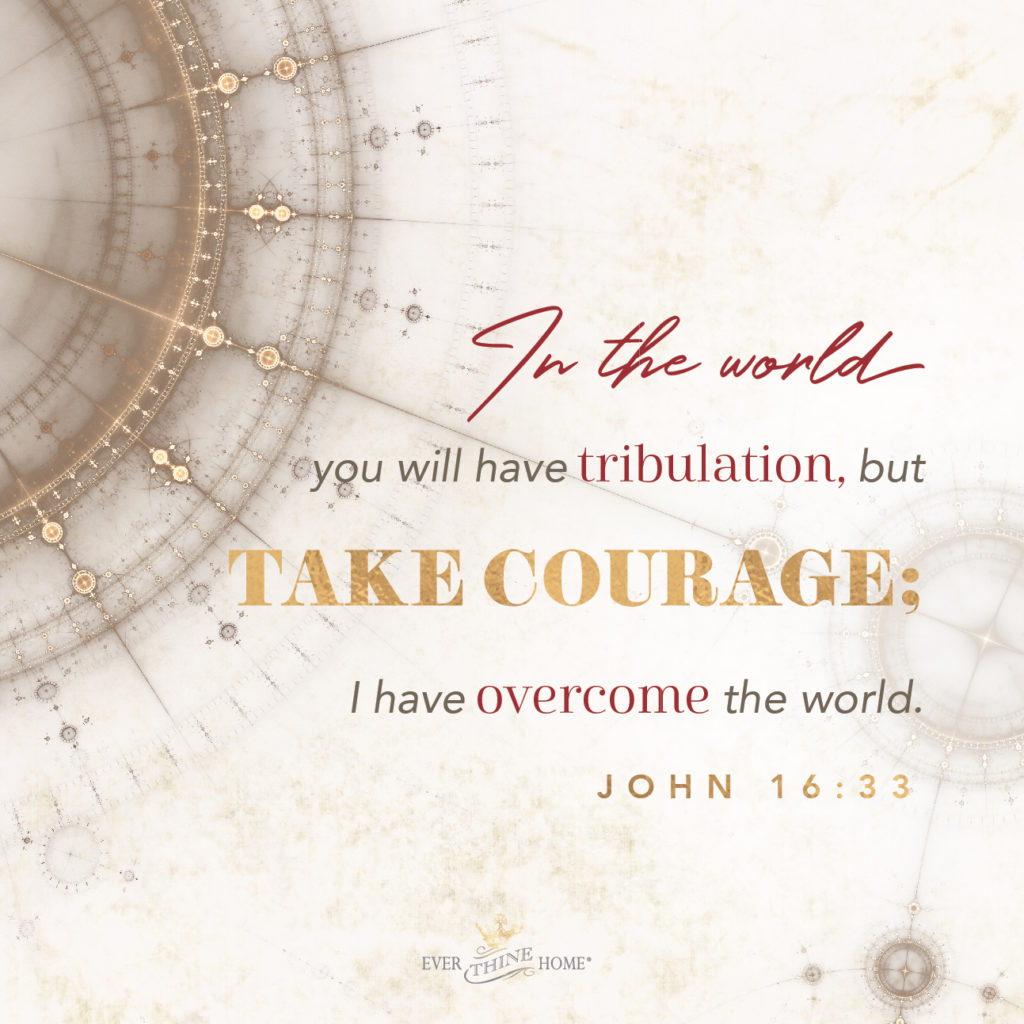 Before I finally went back to sleep, I knew I’d eagerly get my Bible in the morning with my coffee and dig into this verse.

Here is what I found.

The middle-of-the-night words the Holy Spirit brought to my remembrance are the last words of Christ’s instructions to His beloved disciples at the Last Supper! Didn’t know that detail. Last words are always meaningful and often summarizing.

So what did Jesus mean? What was He telling us?

In that last moment, Jesus was turning His attention to the cross and away from His time of ministry and disciple-making. This verse was His summary—of His own life experience, of all He’d seen from heaven since Creation, of all He saw in His family and His disciples. Life was hard, painful, full of tribulation.

Jesus words hinted back to the first garden, the first act of rebellion, the seminal fact that governed the world.

Trouble started a long time ago, so back to Genesis I went. The shattering of all that God had created as good began very early, in chapter three. There Satan deceived and Eve believed; Adam mutely followed and Eden’s innocence was swallowed. 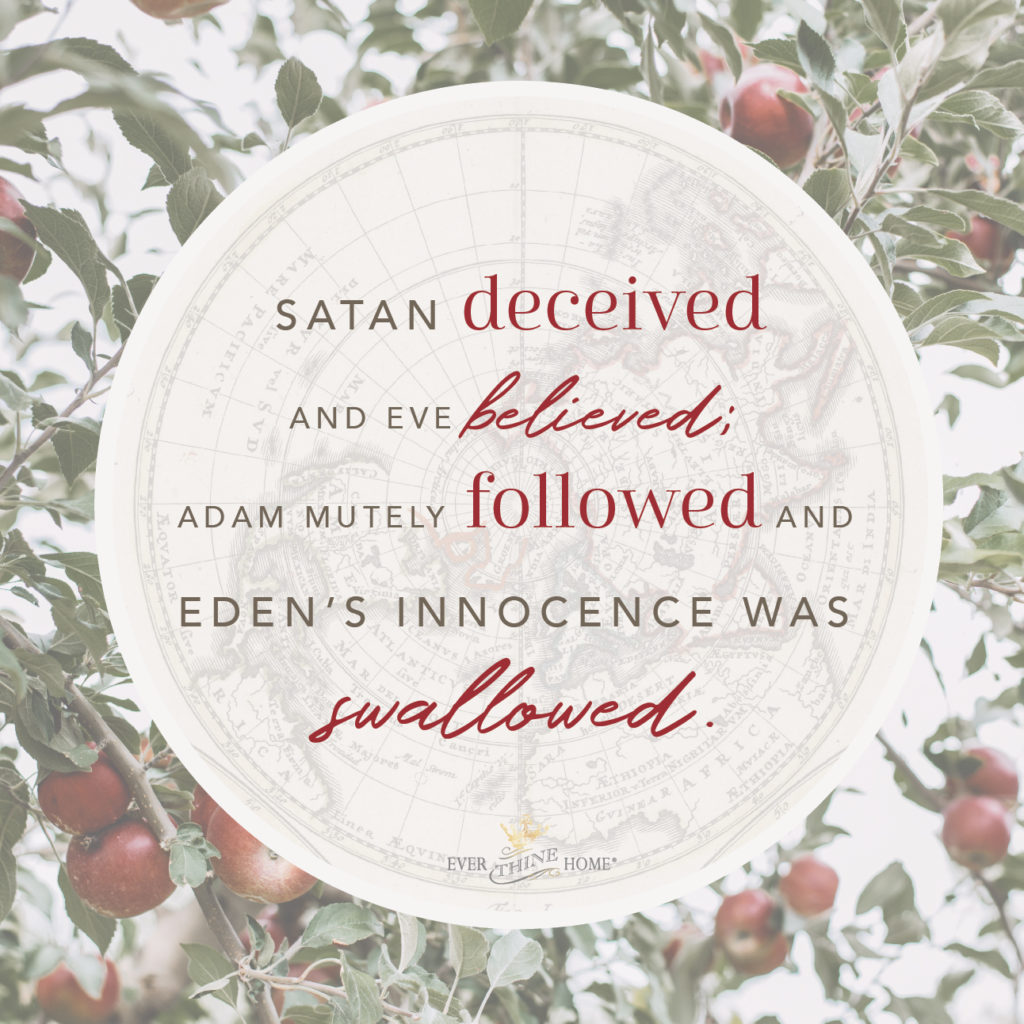 The fall happened so fast.

One sly twist of truth. One slanderous innuendo. One defiant rebuttal. One invitation … to more. The first fatal comparison. Then. One decision for self. And a second. It was over.

A fissure opened in Eden’s perfection. A new sound reverberated across the land. The sound of silence. All singing, playing, worshipping stopped. Every ear of every creature turned to the splintering. Nerves on alert, fear ready explode in a bolt for safety.

God came to the Garden, to walk as He did in the cool of the day.

The Omniscient One knew the source of this tragedy. But as a good wise Father He knew His children needed to own their sin, name it, and learn from it. He quizzed them, they blamed each other and the serpent. Then fell silent.

Judgment began with the instigator, the father of lies: “Because you have done this, cursed are you more than … any animal of the field … And dust you shall eat all the days of your life” (Genesis 3:14, NASB). I imagine God riveting His flaming eyes on Satan to declare, in words nuanced to men but understood by the guilty; “… I will make enemies of you and the woman, and of your offspring and her Descendant; He shall bruise you on the head …” (Genesis 3:15 NASB).

The coming One would in the fullness of time crush Satan and his rebellion against the Most High. The finality of the pronounced judgment was unmistakable.

The Creator of order turned His face next to Eve. She believed the lie and acted first. Her sentence would follow. Did she expect a curse as she’d heard delivered to the deceiver? Perhaps, but there wasn’t one. Instead, pain and suffering would be her consequence in every facet of her creation work in child-bearing and marriage.

Third to face their loving Father was Adam, who received the sentence of hard labor for life. The ground which was blessed with fruitfulness at its inception was now cursed. Nurturing food from thorn-producing soil would be an endless battle.

And over all was the promised natural consequence of impending death.

The rest of the Old Testament reveals the painful heart-wrenching results of this original sin: murder, rape, idolatry, wars, exile … and the thread woven through it all is the lying and deception born in Eden then revealed in every story, in every human, on every page.

Deception is the root. A lie believed unleashed evil beyond our knowing.

In this world you will have trouble, oppression, affliction, tribulations, distress.

And don’t we know it.

But importantly we must remember that the source of our trouble is the father of lies! Paul wrote, “For we do not wrestle against flesh and blood,” meaning our fellow humans, “but against the rulers, against the authorities … against the spiritual forces of evil in the heavenly places” (Ephesians 6:12).

Yes, people do evil things. But it’s because they are surrendered to and imprisoned by the enemy of our souls who incites them to think evil and act in evil ways.

So why did Jesus say, “I have overcome the world”?

Jesus is declaring not just the conquering, then reversing of the curse, the consequences of sin.  Even better, Jesus is declaring He has overcome and is victorious over the world forces of darkness! He inflicted a mortal wound on the being behind the curse, Satan himself, the “prince of this world,” the deceiver, the divider, the destroyer.

Today in this already tension filled new year of 2021, I can relax knowing that the real enemy is invisible and already defeated! For me these words provide hope that God is working steadily to implement His plan. I pray they give you hope, too.

Practically, today, the divisions between people in our land, our world, can be resolved if we followers of Christ remember:

God is not surprised.

God is in control.

The victory has been won.

Everything on earth has a life expectancy, an expiration date. Nothing lasts. Everything breaks or dies or runs out or becomes obsolete. But the earth itself remains. Its foundations are sure; as Psalm 75:3 tells us, “It is I who keep steady its pillars.”

And as long as earth remains, God has promised, “Seedtime and harvest, and cold and heat, and summer and winter, and day and night shall not cease” (Genesis 8:22).

Therefore, while earth and life remain …

I am called to imitate Christ, to love and forgive and show grace.

I am called to be quick to listen, slow to speak and slow to anger.

I am called to demonstrate faith even in a world that feels upside down.

I am called to believe that God is always working, and Jesus is working too (John 5:17).

May we followers be more surrendered, more pliable in the Master’s hands, always believing the truth and the unseen plan God is working. Amen.