The Newborn Babe Is the Son of David 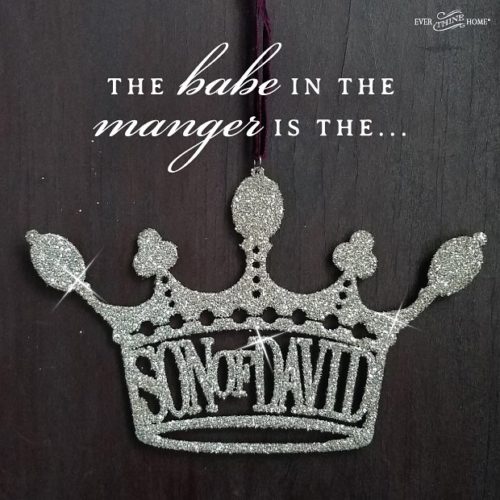 Does your family have traditions that have been passed down for generations?

At our house these traditions included reading the Christmas story and placing the manger scene in the most prominent place in the house, with the kids always arguing over who got to place baby Jesus in the center where He was worshiped by all.

Our traditions also included making my mother’s cutout Christmas butter cookies and pecan tassies while playing Christmas carols. Baking together as a family ensured Christmas was the same comforting experience as always.

Knowing that generations in your family and believers around the world have celebrated the glorious truth of Christmas morning makes our celebrations today richer. But what if you could prove your ancestors were royalty, how would you feel? A little taller? More important perhaps?

For centuries, the Jewish people have kept meticulous genealogical records to prove their ancestry and to watch for the promised King who would one day deliver them and rule in righteousness.

One genealogy started with young David, a boy who lived with sheep, slept out in the open, and felt more comfortable in the hills and valleys surrounding his hometown, Bethlehem, than in its streets.  His seven older brothers were well known in the region of Judah. But David was seldom seen because of his duties pasturing his father’s flocks.

At just the right time though, God called David from obscurity and anointed him king over His people Israel. Soon after, David killed Goliath, began to lead men into battle defeating Israel’s foes, and years later received from God a very important pronouncement that his throne would last forever. Only a son of David could be the future king of God’s people.

One thousand years later, Matthew wrote an eyewitness account of the life of Jesus. In his first sentence he wrote, “The book of the genealogy of Jesus Christ, the son of David, the son of Abraham” (Matthew 1:1). Declaring Jesus to be the Son of David was significant. It was a title of profound meaning. Every Jewish family knew that the future king and Messiah would come from David’s line: a man born to one of his descendants.

Not only did the record books prove Jesus’ direct connection to King David, but many who lived in His day recognized Jesus as the Son of David.

Though Jesus was genetically linked to David, He was more than any human king. Only God can give sight to the blind and raise the dead to life.

Jesus was the forever Heir to David’s throne.

Will you be so bold to declare who Jesus is this week as your family prepares for Christmas? Share the truth of His lineage and prophesy fulfilled with your family so that they know the significance of the one we worship and receive in a few days on Christmas morning.

Remember, Jesus came to rule a kingdom of hearts.

Will you be like the children who proclaimed him Son of David? Is He king of your life and your heart?

You can invite Him in this Christmas.

“The Newborn Babe Is the Lion of Judah”

“The Newborn Babe is the Savior”