The Newborn Babe Is Our Savior 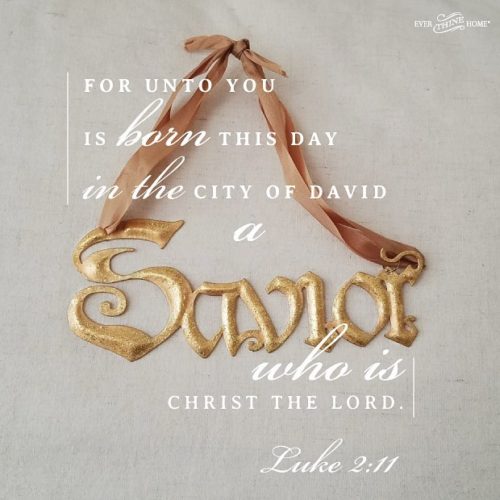 In most tragedies you’ll find a story about a savior.

During mass shootings there are people who protect others with their bodies, or people who try to overpower the shooter, and always people who step in to stop the bleeding and keep injured victims alive. After tornadoes someone always steps up to rescue the trapped, to hold someone’s hand, to pray. Often unnamed, these men and women are doing what Jesus did and still does for us: provide saving help.

The greater tragedy today is too many of us, even many who claim to know Jesus, are unaware that we are bleeding and broken, in need of Jesus’ daily saving grace and mercy and power. We try to cover our inadequacies, our failures, our gaping wounds with performance, power, and addictions of all kinds instead of going first to our Savior. By His amazing grace and love He chose instead to come to us first.

Those in the Old Testament who believed knew God was their Savior, for He told them plainly, “I, I am the LORD, and besides me there is no savior” (Isaiah 43:11).

But on a cold dark night this name, Savior, was given to a real in the flesh baby lying unnoticed in a feeding trough.

Stunned shepherds heard a startling nighttime birth announcement delivered by an angel who stood before them surrounded by light as bright as the sun:

“Fear not, for behold, I bring you good news of great joy that will be for all the people. For unto you is born this day in the city of David a Savior, who is Christ the Lord.”

The delivery was unlike any birth announcement we get in the mail declaring name, date and weight, yet the angelic announcement did reveal the baby’s name: Savior. These Jewish men and boys—whose lives were rough, dirty and lonely —were told a name they understood to mean Messiah, the long awaited and promised rescuer of their people

Consider that the very first people who lived on earth were also the first ones to need a Savior.

Adam and Eve chose their own way over God’s way and became forever trapped in bondage to a body that would die instead of living forever. You and I are their children, alive in bodies that are broken by sin and utterly unable to reach God’s standard of holiness.

But because God loves us He sent Jesus to be our Savior!

Celebrate your salvation today and may your joy be great on Christmas Day!

“The Newborn Babe Is the Lion of Judah”

“The Newborn Babe is the Son of David”