Dear Barbara: How Do I Convince My Husband to Change? 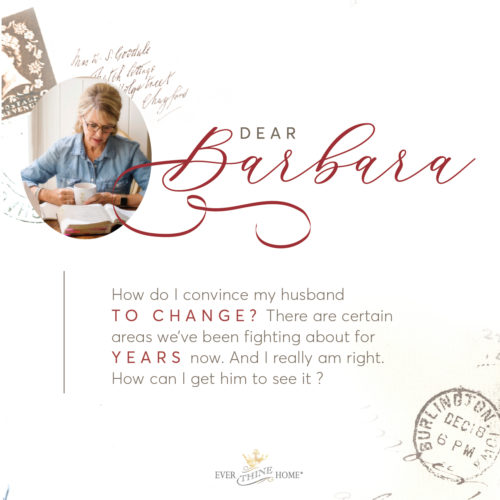 Dear Barbara: How do I convince my husband to change? There are certain areas we’ve been fighting about for years now. And I really am right. How can I get him to see it?

The moment I married Dennis, I knew I was in for an adventure. He wasn’t just different in his interests. His recipe for life was positively foreign. We were like oil and water, constantly separating in our jar. We still cannot be more different. (Note the present tense!)

For example, I remember Dennis would get an idea and be off and running. I, on the other hand, was used to thinking through things and evaluating before acting. Often during our first year of marriage I felt left in the dust.

It’s fair to say that the unique, fresh traits that attracted me to my spouse became tiresome or irritating after years, or even months, of marriage. When I encounter these clashes, I learned I have choices:

One day a couple years into our marriage adventure I decided to press for a change in my husband. I realized while doing the laundry for the umpteenth time that my husband’s tee shirts, boxers, and socks were always inside out. How inconsiderate! But still I took the time to reverse his clothes right side out and then fold them.

One day I asked him if he would change his habit so that my job would be easier. His answer surprised me: “That’s the way I’ve always done it. I’m a man and men do that.”

He wasn’t angry … flippant is more like it. Saving a minute or two of time wasn’t worth the effort, was the message I heard.

About 10 years later I decided to ask again. With laundry for eight people, I was desperate to save any time I could. This time I explained that inside out clothes weren’t a deal breaker for our marriage. I told him that it would be really helpful if he would change the way he’d always taken his clothes off. And this time he happily agreed.

Both of us were more mature. New habits take time, but he wanted to lighten my load and made it a point to cooperate for my sake.

I know there were (and are) things that I’ve wished to change about my husband that are much deeper than dirty laundry. But the truth of the matter is that I honestly don’t have the persuasion, the argumentative skills, and most importantly the power to change a single one. Only God can change people’s hearts and habits. 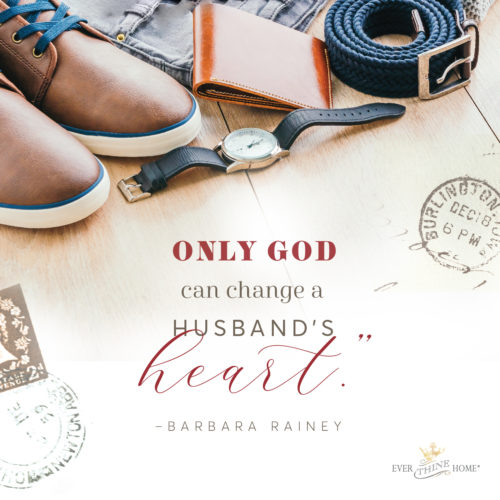 A young wife I know faced a challenge in her husband that did need to be corrected. She shared with me that her husband viewed pornography, repented, and then got back into it. She felt she needed to press for change, and I agreed. This kind of deep change in a man’s life is crucial because it was a pattern of sin.

She began to seek good council from mentors and then from a trained godly professional counselor. Together, they made a plan for actions she could take to get her husband’s attention in a respectful way. He did change, and their marriage is healthy today. Unholy lifestyle choices, which are offensive to God, should be addressed and changed.

But personality traits, natural gifting and skills (and the lack thereof), personal preferences, and emotional wiring cannot be changed. They are not sinful. The expression of those from birth traits can be sinful or unhealthy but can be coached, refined, and developed.

I’ve learned to let my husband be who He is, who God made him to be. Most of the time. We aren’t perfect and have not arrived. And he’s learned to be sensitive to how his spontaneity and other preferences impact me. Today he’s much more willing to adjust his natural bents out of love for me.

I imagine you, too, have discovered there is much that cannot be changed in your husband. The wise wife learns to accept those differences. Instead of nagging and pestering and scheming to force the change, she learns to trust God to do any changing or moderating on His timetable. She also learns to ask God to change her heart to be more gracious to her husband and surrendered to God for His plan and timing.

Learning to understand and fully appreciate this other human being for who he is and who he is becoming opens the door to peace. Accepting and appreciating his oppositeness—that he will never be like you, nor you like him—keeps us from becoming critical and resentful.

We are still, after 49 years of marriage, very very different people. With the help of God’s Spirit we’ve actually learned to appreciate and enjoy those differences and idiosyncrasies instead of resenting and being repelled by them anymore.

“Dear Barbara: What If I Want to Quit?”

“Dear Barbara: How Do I Not Resent My Husband?”

2 thoughts on “Dear Barbara: How Do I Convince My Husband to Change?”