I’m excited to finally get to tell you about some of what I’m learning in seminary! It’s been a full month of jumping through lots of new student hoops, but finally I’m getting into my class work and I’m eager to share.

I also want to talk about some amazing God moments we saw and experienced and take a look at what’s coming on the blog in October.

My first class this semester is Bible Study Methods and Hermeneutics (a strange word meaning interpretation). Our first two assignments have been to observe one verse in detail, Acts 1:8, and without looking at verses before or after or at any commentaries or notes, to find 25 facts and obvious details. The verse reads, “but you shall receive power when the Holy Spirit has come upon you; and you shall be My witnesses in Jerusalem, Judea, Samaria and to the remotest part of the earth.”

For example, starting with the first word but, here are two observations:

From the second word you:

And so the process goes. It may seem dull and obvious, but paying attention to the details and nuances of the Words of God Himself will cumulatively help us understand what God is saying and why it matters to patiently listen to Him.

In the class lectures following two weeks of finding observations about one verse, we then enjoyed looking at the greater context of Acts 1:1-11—the reward for two weeks of detail work. Here are a few very interesting details:

1. Luke, the author of Acts and the book of Luke, knew the apostles! Personally. Think about that for a minute. He was friends with John and Peter and Paul and probably more of the 12. He had conversations with these who saw Jesus daily for His three years of ministry. It’s possible Luke saw the risen Christ at one of His appearances.

2. A man addressed as “most excellent Theopholis” was named by Luke in both of his books. Theophilis was a wealthy Roman of high social status, hence the honored salutation by Luke, who scholars believe inquired about the man Jesus and requested letters about Him and His teachings.

Like patrons or sponsors of artists in the Renaissance era like Michaelangelo, it’s believed Theophilis funded Luke’s work in recording the details of the life of Jesus and then the history of the early church as it spread across the Roman world. Therefore, these books are addressed to him in honor of his financial investment in writing the story of Jesus from first hand witnesses.

3. Related to verse 8 are, of course, verses 6-7, which read, “ … they asked Him, “Lord will you at this time restore the kingdom to Israel?” He said to them, “It is not for you to know times or epochs which the Father has fixed by His own authority; but you will receive power when the Holy Spirit has come upon you; and you shall be My witnesses …”

The disciples understood the promises of the kingdom to come recorded in the Old Testament. They had heard Jesus teach repeatedly on the kingdom of God to come. They’d watched the Son of God conquer death; He was now clearly invincible. That alone made Him a king unlike any other. And for 40 days Jesus had walked around on earth with them. So it was logical for them question: Was He here to stay and to rule on earth?

Our Savior is so kind to us. He was not exasperated with His disciples that once again they didn’t understand. They were actually correct about the expectation of the kingdom and He affirmed them, didn’t rebuke them.

But they were wrong on the timing. The Father is the Keeper of the clock, so let the timing go, Jesus was saying. Instead Jesus revealed the next phase of God’s plan: taking the story of Jesus to the world. It’s not time for the Kingdom on earth, but it is time for you to be my witnesses.

Jesus revealed just before He ascended into heaven the next phase of God’s plan and the key to the rest of the entire New Testament yet to come.

It’s been fun to learn these new details about Jesus that I never knew before! Hope they encourage you, too!

Have you ever had a divine appointment?

As if to illustrate and give life to Acts 1:1-11 for me, God orchestrated several divine appointments for us as we traveled to Cincinnati for the Christian Alliance for Orphans annual summit. A divine appointment is an encounter with someone that is clearly not coincidental.

First, on our flight we sat next to a flight attendant who wanted to share her story. We encouraged her to go to the Weekend to Remember marriage getaway to learn about marriage even though she is now single. She’s already emailed us saying she’s registered to attend.

During the conference we met several parents who had used Passport to Purity with their kids and raved about it. We talked to Diego Fuller and his father Bishop Blake, who have the most remarkable stories about Diego and his five foster brothers, all now adults. They are writing to tell the stories of what God did, and we are hoping we can help then get them in print. The world needs to hear. You can check out Diego on Instagram at iamdiegofuller. He’s written a great Christian rap song called “Engrafted”!

Then, as we were getting our last coffee and bacon gruyere egg bites at Starbucks before driving to the airport, we met a man who had just filled a huge thermos with coffee. I asked about his coffee volume and we began to talk. He has a fiancée and was interested in all we had to share. Who knows if he will look up any of our content, but it was a sweet positive conversation with a dear man who has worked through lots of hard things in his life.

I’ll be putting up blog posts on these topics, which I hope will be of interest to you, your family or to someone you know. Be sure to share them widely!

I’m also working on a post about parenting kids with disabilities which I’m excited to share. And I’m working on another ebook on gratitude that we hope to send later in October or the first of November.

We also have several new podcasts coming in late September and into October, so if you prefer getting content via audio, watch for those in your inbox as well.

Finally, I wanted to thank you again for all your questions and comments in response to July’s letter. I wrote a blog post with answers to two great questions and intend to reply to more, but getting started in seminary has taken more time than I expected. Hopefully I’ll get to them soon. And if you have any more questions about life or family that you’d like me to tackle, please let me know by using the comments section for this blog post.

P.S. Since we got home from the Summit conference I’ve bought pumpkins and have started decorating my porch which is always a happy thing for me to do. I’m not finished but here’s how it looks so far! 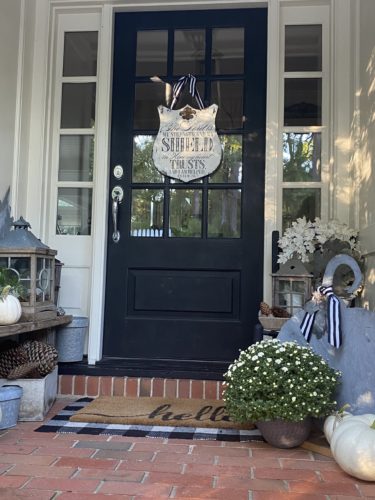