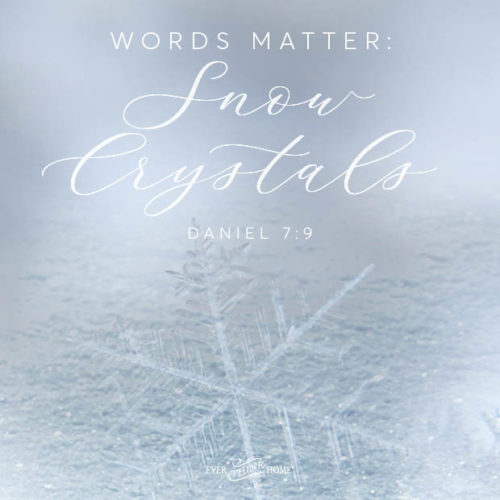 I have a book all about snow. More like a photo album, each page shows a highly magnified and perfectly lighted snowflake. Also, like a scientific journal, the book classifies snowflakes into categories; needle, column, plate and rime. Though there are eight broad classifications and at least 80 variants, what unites all snowflakes is they are each a single crystal. Every single snowflake forms in supersaturated air masses acquiring their unique crystal shape as they move through differing temperature and humidity zones in the atmosphere as they fall to the earth.

But individual snowflakes are not white. They are crystals, clear as glass. We perceived them as white because each crystal is faceted; as light passes through the crystal panes a diffuse reflection of the whole spectrum of light is seen by the eye which reads it as white.

Is it just a fact, that snow is seen as white?

Or is there more to see?

Might the fabric of God’s clothing be something we do not know on earth? Was it more than just white to their eyes? Did it sparkle like sequins or diamonds? Might it be actually made of  snow crystals? Maybe snow isn’t cold in heaven, or maybe cold won’t feel cold anymore. Is it possible?

It is common knowledge that snow is simply frozen water. We collectively know this as a boring fact we learned in elementary school and we are now much wiser, having moved on to more mature things.

I think we have lost the wonder of this tiny but crucial miracle of God’s creation. Water is the combination of two gases; a profound mystery, the why and how of it we cannot comprehend. Its trinity forms a “global temperature control system,” the three atoms together making a molecule precisely linked “so that an incredibly tiny but highly charged electrical system results. If this were not so all the properties of water would be different. Life would not exist.”*

Our Creator was thinking of you and me.

And maybe the fabric of God’s clothing is made of water!

As you watch a snowfall this winter, may you marvel at the many facets of God’s creativity and kindness to you. And if you can take a few minutes, look up the word snow on your Bible app and read some of the verses. Make these winter moments a time of worship and awe before your Divine Artist.

He is thinking of you at this moment! Waiting for your thanks and adoration.

*The Evidential Power of Beauty, page 141.