When Your Home Feels Empty 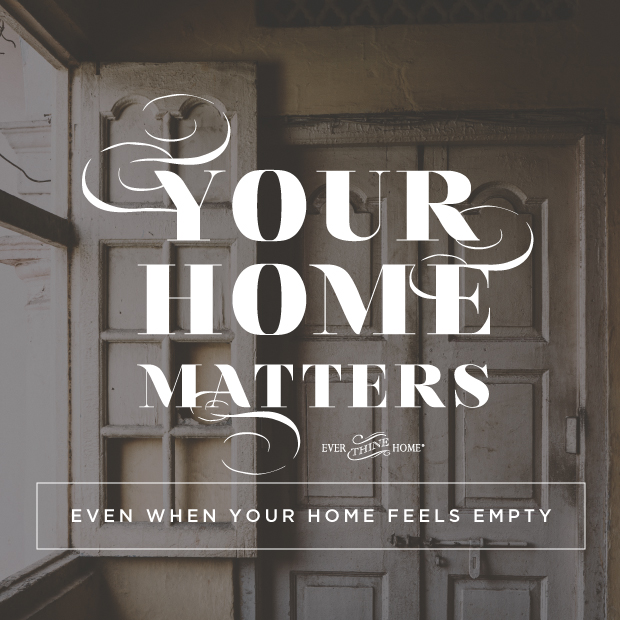 “One day when the kids are gone, we will sit quietly by the fire and listen to the laughter in the walls.” For years a printed version of these stanzas from “Laughter in the Walls” by Bob Benson hung on a wall in our home, reminding me of a someday that, at the time, felt as far away as eternity. His ode to the daily ups and downs of a family of five resonated well in our home.

But one day, just like all the overwhelmed mothers before me who had longed for soul-replenishing peace and quiet, the still and quiet came.

With too much finality.

Like the reluctant closing of a wonderful book when the last sentence has been read.

The best books leave me longing for more chapters to the story. As the last page comes into view, I slow my reading, savor every word, and will the book to last just a little longer. Yet, always, there is an end.

In my youngest daughter’s last year of high school, my last chapter of kids-at-home, I savored every single event, lingered in conversations longer than I dared, and wished to slow the days as the last page of the calendar turned. Graduation day was brightly circled. Followed by lots of blank squares.

The end was in sight, but I hoped it would never arrive.

Dennis and I cried like babies when we left our oldest at her college dorm. We knew our nest would never be the same and it wasn’t. Then one day the last child left, the tears came again at the final departure. Then the peace and quiet so absent in those mommy years rushed in and filled the vacuum my flown-away children left behind.

It was an unfamiliar, unwelcome sound that demanded I make peace with it.

If your home is newly emptied or nearing empty you understand this stew of mixed emotions.  From a little nest the two of us built one fine spring day to the needed larger house crowded with our six children as they maxed out the space in our home and in our hearts; home changed over those two decades. It had become a dwelling beautifully crowded with memories and meaning.

But suddenly it was just the two of us again. How did that happen and who were we now? Certainly not the same two who began this story.

The familiarity and warmth of home nurtured us as we returned from the last drop-off at college. The comfort of home helped us create and adjust to a new normal. Our dwelling place gave us the safety to rest, reflect, and learn to dream again.

Now that we have grown to love being just the two of us again, home is still our refuge, our haven and our embassy, our launching pad to God’s calling and purposes in this new season of life.

Hebrews 13:2, “Do not neglect to show hospitality to others…” reminds us there are many who need to see the grace and feel the love of God that lives in our homes. But sometimes we need help knowing what that looks like when it’s been so focused on our children for several decades.

Thankfully, I had a wise friend who modeled this for me, a widow named Miz Kitty. I was in my late 20s when I first met this smartly dressed, 50-something woman living alone in her empty nest. As I got to know her, I experienced the warmest, most welcoming home I’ve ever known.  Miz Kitty refused to become isolated with an empty nest; instead she opened her door to a steady stream of women. She listened and prayed and encouraged and, in return, was loved deeply by a small army of people who helped meet her needs until she died in her late 80s.

Another example that encourages me is a pastor and his wife, both in their 50s, who invited a young Syracuse University professor, Rosaria Butterfield, over for dinner. Rosaria was not just any professor. She was, at the time, a very radically-minded feminist who had expressed strong antagonism against anyone who believed in God. The pastor and his wife weren’t deterred. They persevered in a desire to show Rosaria that Christians weren’t angry, narrow-minded people, but were those who had experienced and wanted to show others the love of God. God used the warmth of this home and the two who lived there to soften a heart into the Kingdom of Light.  This miraculous story is now a book called The Secrets of an Unlikely Convert.  And if you’d like to hear Rosaria tell the story about this couple’s impact on her life, you can listen to the FamilyLife Today radio interview with her.

Then there is Sue. She lived in Charlotte, North Carolina, and as a new widow at 86 began a Bible study in her home with a group of 12 young women in their early 30s.  She taught them the Bible, even gave them tests, and took them on a retreat with their young husbands. The group became known as “Sue’s girls.” Every week for 12 years these young women came to Sue’s home to learn from her until her death at 97! Though I never met her, her example has remained an inspiration to me and I want to be like her when I’m in my 90s. Don’t you?

Even if your home feels sadly silent because your almost-mature little birds have flown away, God still wants life to be nourished in you and in your home.

An exciting transition to a new adventure is ahead.

I pray you will take the time you need to rest and literally recover from the long work of mothering. I challenge you to pray for ideas, dreams, and clear guidance from God Himself on His next steps for you. His plans and purposes for us on this earth extend to our very last breath.  And that in itself is an exciting reality!

For more encouragement about empty nest, listen to the FamilyLife Today broadcast and check out my book on the empty nest, Barbara and Susan’s Guide to the Empty Nest.

17 thoughts on “When Your Home Feels Empty”