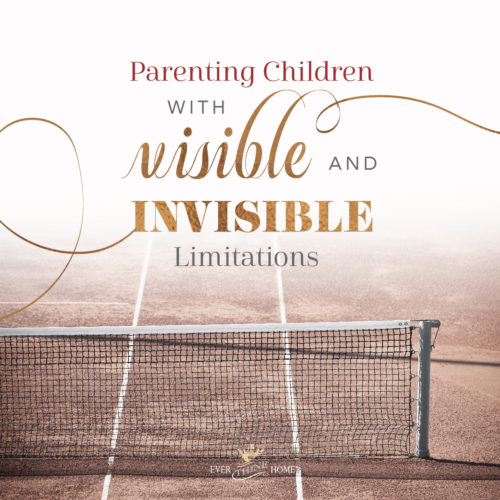 Of our two sons, one was more athletic, while the other was more scholastically inclined. The younger son’s first word was, “ball.” The older one started reading before age five. They could not be more different.

Instead of playing basketball for hours on the court Dennis built for the boys (because that’s what he did in his childhood), Samuel found a tennis racket and began hitting balls against the brick wall underneath the basket. It became clear he’d found his sport.

We enrolled him in lessons and then in competitions. By early seventh grade he was playing for the number one ranking in the state in his age division. In a tournament to determine new rankings, Samuel almost had his opponent beat, but missed one point and then on the next serve lost the match. He was disappointed, of course, but we hoped this was just the beginning. Parents dream big for their kids!

That day was indeed the beginning. But it was not the start of a dream tennis career.

A couple weeks later Samuel’s coach asked to speak to me when I picked him up after his lessons. He explained that Samuel wasn’t getting to balls he used to return with ease. “Something’s not right,” he said.

Immediately I lined up appointments for our son. The early diagnosis was unclear, so several months later we went to the Mayo Clinic, where neurologists labeled Samuel’s decreasing ability to run with the name, Charcot-Marie-Tooth, a slow deterioration of the nerves to the lower legs.

After returning home Samuel wanted to keep playing tennis and I agreed 100 percent. I designed a pair of tennis shoes with elastic support from ankle to toe to help him lift his feet so he could run and not fall as often. But six months later it was clear he would never run again.

I’ll never forget our grief and heartbreak. Dennis and I went for a walk the day the truth finally became clear to me. Five minutes into the walk I sat on a log, fell forward into a fetal position, and cried uncontrollably, with groans from a place so deep within I never knew it existed.

For the next six months or longer Dennis and I mourned. Our athletic son had lost his greatest strength. He never liked school and now it was worse. In his own grief he struggled even more in class. As our most active kid he started getting in trouble.

We knew he was mourning, but what 13-year-old knows how to process catastrophic loss? We didn’t know how to help him either. It’s impossible to prepare for something like this. So we leaned on God, prayed constantly, asked for wisdom, made mistakes, talked to those wiser and more skilled, and trusted God to use this tragedy for good in ways impossible to see in the moment.

As the months moved slowly forward we wondered how Samuel would handle high school. Would he go to college? Would he ever get married? What kind of career could he have? Would he be confined to a wheelchair one day? And most of all we wondered what God was doing and what He had planned by giving our son a real incurable life-altering physical disability.

All parents have high hopes for their children. We want life to be easy for them. We want a pain-free existence as much as is possible. We desire all these things because our children are extensions of us. “Every child is a piece of his mother’s heart walking around outside her body,” said author Jean Fleming. And it is true. Even today when my children suffer or are in pain I feel it as if it was my own.

When Samuel was diagnosed Dennis and I both longed to give him our legs. Dennis even asked if there was a transplant surgery of some kind. We would have sacrificed happily because we love our son enough to give our lives for him.

Limitations are common to all

The truth is we don’t have just one child with a limitation. Our oldest daughter is dyslexic. Our adopted daughter, though not diagnosed with a “disability,” still had her own very real obstacles through no fault of her own. Our other three have less perceptible but real limitations: bad allergies, imperfect eye-sight, teeth prone to decay, and physical limitations that prevented some of their ambitions, like becoming a volleyball star or a musician. Everyone in our family and yours is limited by relation to Adam and Eve.

My brother’s son has autism. Another nephew is on the spectrum. A dear friend’s son at 21 is living with ulcerative colitis which greatly limits his lifestyle as an otherwise healthy young man. My daughter Laura’s best friend has a son with Down Syndrome. Another friend’s daughter has three children, all diagnosed with the rare condition PANS.

Even the most intelligent among us may be geniuses or near genius but lack ordinary common sense. Like one of Dennis’s professors at Dallas Theological Seminary who had a photographic memory but forgot that he had driven his car to a speaking engagement in Houston. Afterward, he left the hotel, taxied to the airport and flew home. When he arrived he phoned his wife to come get him and she asked what he did with the car! C.S. Lewis also had a photographic memory but struggled with spelling his whole life. Go figure.

But the whole truth is that all of us are born with multiple limitations. We have no idea how much we lost in terms of intelligence, our five senses, physical and emotional abilities when Adam and Eve “fell.” All of humanity is “disabled” in some way. As I learned from my sister-in-law disabilities are really “diff-abilities” … different abilities. 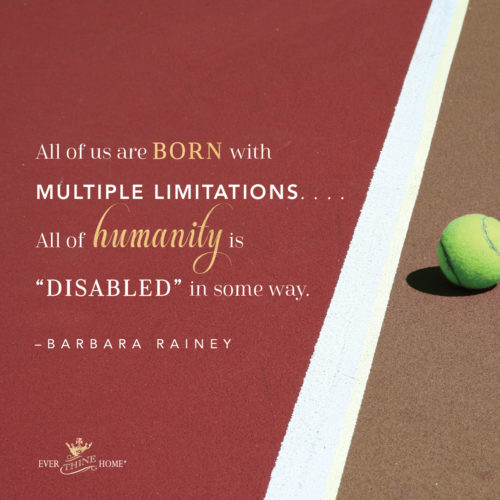 The most important point of this entire post is this: None of your children or grandchildren are without disabilities. All of them have limitations, and this is good. Recognizing our own flaws and helping our children recognize theirs is an important step to acknowledging our need for a Savior.

The greatest tragedy of all is not being born with a disability or with limitations but living without knowing one’s brokenness and need for the Savior, Jesus Christ.

A single mom wrote about all that her 16-year-old son was missing since his father had died, summarizing: “Such are the children of the kingdom of God—all are missing arms or limbs, all are cracked vessels. Out of such raw material God is pleased to build His kingdom, the better to show the power is from Him.” Paul taught that we are all jars of clay, formed from dirt. All by God’s good design.

Here are six ways to embrace and give thanks for the disabilities and weaknesses God has woven into your children for their good and His glory.

Our sin nature is so quick to defend our own perceived goodness and to measure ourselves against others who appear to be inferior than we. That was my own story. My three brothers were always fighting and getting into trouble. To avoid my father’s displeasure and occasional anger I was the good girl and never did anything to rock the boat.

Though I was eager to receive Christ as a college student, it was not because I felt sinful. In my own view I was not really “wicked” or “depraved” as the Bible declared. It wasn’t until my 40s that I saw the true depth of my own depravity and was convinced even more how desperately I needed Jesus’ sacrifice on the cross for my sins.

Paul declared in Romans 3:10-12 “None is righteous, no, not one; no one seeks for God. … no one does good, not even one.” Believe it and pray your children believe it too.

An important part of your job as a parent is helping your children learn how to discern God’s directions for their lives. A favorite verse of mine is Ephesians 2:10, which says, “For we are His workmanship, created in Christ Jesus for good works, which God prepared beforehand …”

And pray they will not be lured by the culture into thinking they know better than God. Sadly, too many children and adults today strive in thousands of ways to be all they imagine, many with tragic results.

The sooner we acknowledge we are fallen and will never find perfection on our own, the sooner we will release the pressure and turn to Jesus. “There is salvation in no one else …” Peter declared in Acts 4:12.

So too in our lives God has plans and purposes that will reveal His miraculous power and care for us that we might glorify and worship Him.

Through our own children and from watching others with disabilities, I’ve learned that the pains and losses from these “gifts” that we would change or wish away are the very things God wants to use to purify, strengthen, and mold our kids into His image. 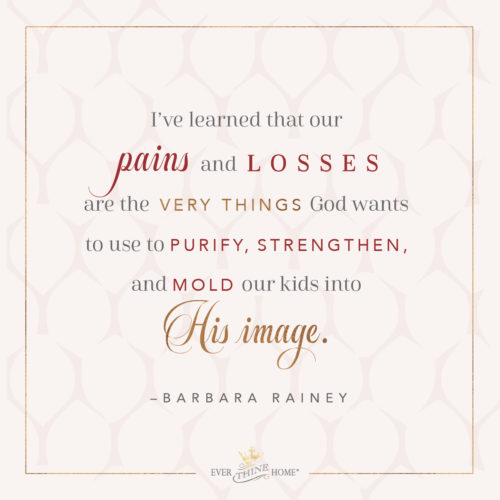 I pray this will encourage all you moms and dads who like we did want so much for your kids. It’s good that you do but keep your expectations always in surrender to God’s greater plan.

And I hope you will pass this on to someone you know who is discouraged because their child isn’t the star player or pupil but instead has been given more ordinary abilities and plenty of limitations.  Or maybe you know someone has has a child who has been given a diagnosis.

The next session of Cultivating Hope in Times of Hardship and Disappointment drops tomorrow. If you haven’t yet watched session one you can watch it here. If you enjoyed session one you can watch the remaining four by clicking here to subscribe to Barbara’s Friends & Family content created especially for paid subscribers. This bible study is just the first of other new content we have planned for this year. 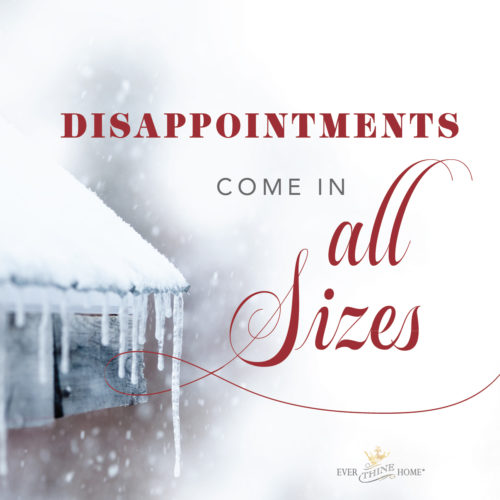 Disappointments Come In All Sizes