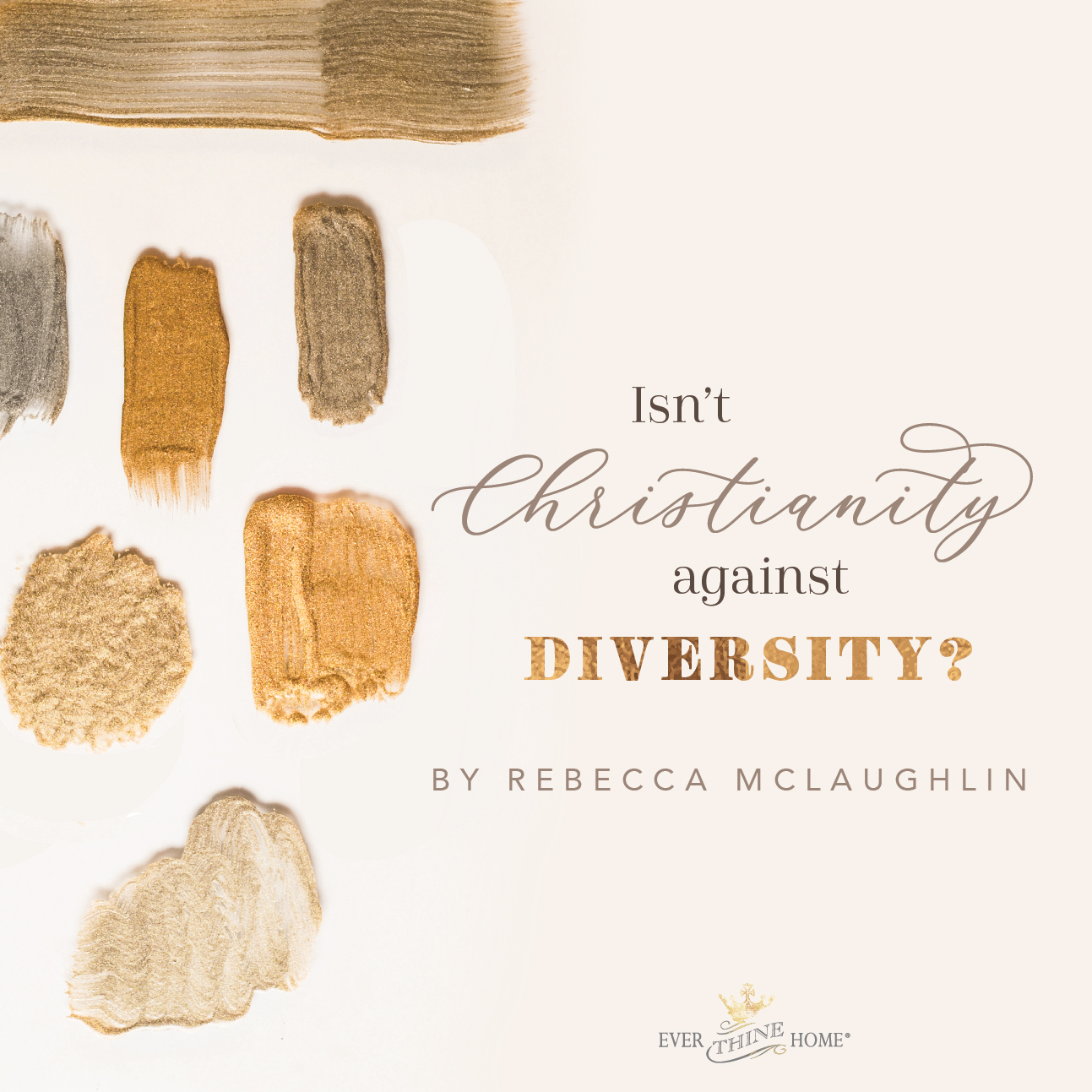 Note from Barbara: One of the best things about summer is the more relaxed schedule that allows for more of my favorite activity: reading great books!  And I love sharing titles with my friends, so this summer you will find lots of guest posts coming your way by authors of books I eagerly recommend reading for both enjoyment and growth.

Without the structure of school schedules, summer is also a good time for longer parent-child conversations at bedtime, around a campfire, on a long hike, or in the car driving to or from vacation or a visit to grandparents. Dennis and I have always believed one of our jobs as parents is to be intentional. Moms and dads must have goals, be on the offensive, and be prepared to deposit truth in the hearts of their children at every opportunity God gives.

If you have teens or pre-teens, Rebecca McLaughlin’s book, 10 Questions Every Teen Should Ask (and Answer) About Christianity, will give you a map for conversations this summer. It discusses the biblical thinking every teenager must have to survive in an increasingly anti-Christian culture. Prepare yourself as a parent and then transfer that knowledge to your almost-adult children. The following excerpt comes from chapter two of Rebecca’s book; the other nine questions are listed at the end of this post.

Thank you Rebecca for sharing these ideas with us and to Crossway for partnering with us to help us all become more like Jesus.

One of my favorite parts of the Bible is the beginning of John’s Gospel. It goes like this:

As the story goes on, we discover that this “Word” is Jesus. If what John says is true, it means that Jesus invented diversity. He made people from Europe and Africa and Asia and South America. He made you and he made me. He made black Americans and white Americans and Native Americans and Asian Americans. He made people whose parents have similar racial heritage (like me), and people whose parents have different racial heritage—like my beautiful friend Catherine, whose mother came from Ghana and whose father came from Korea.

Jesus himself was a brown-skinned, Middle Eastern, Jewish man. But he delights to make people with all different kinds of skin color and eye color and hair type and body type. Jesus loves to be creative, so he makes people beautifully different. It’s helpful for all of us to remember this when we feel bad about how we look. 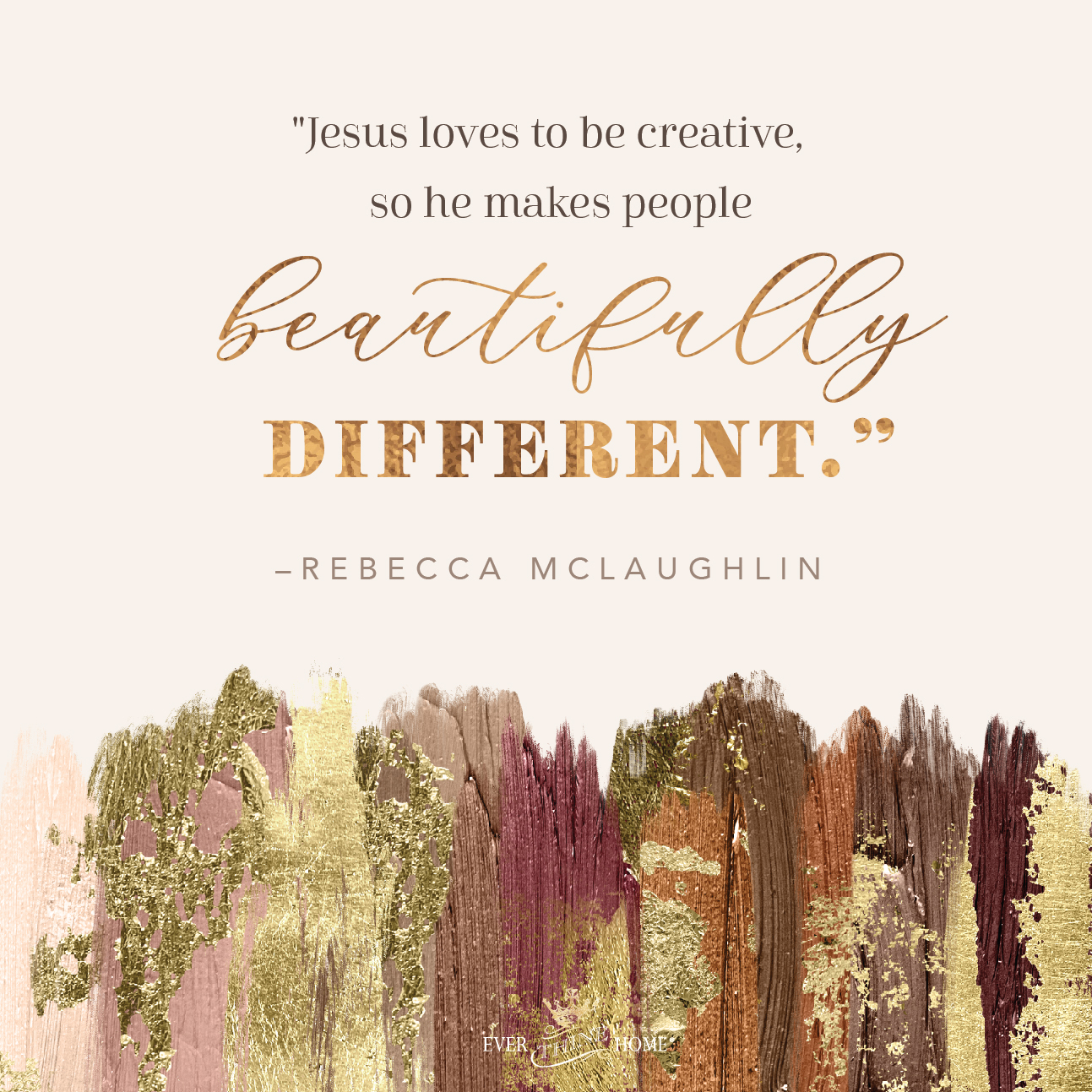 When I first met my mother-in-law, she showed me photos of my husband when he was a baby. Between you and me, he looked pretty terrible. He had about fifteen chins and lots of funny features. But when I laughed at how he looked, his mother was not happy with me. That was her baby I was laughing at, and in her eyes, he was extremely cute!

When God looks at you—however imperfect you might think you are or however different from others you feel—he sees his beautiful child, and he delights in you. What’s more, despite our physical differences, the very first book of the Bible tells us an amazing thing: God made all humans in his image and after his likeness (Genesis 1:26–27).

What does this mean?

We’re all made in God’s image

As I write this, my son is one year old. People often tell me he looks just like my husband—except that he’s a baby with fat, smooth cheeks, and my husband is a grown man with a scruffy beard! The idea of a child looking like a parent is part of what the Bible means by us being made in God’s image.

But there are two reasons we know this is not about how we look physically. First, until God became man in the person of Jesus, God did not have a physical body that we could look like! Second, because God made so many different people all equally in his image, we can’t say that God looks like one kind of person. My son might be the baby-faced image of his dad. But every human infant in the world—whatever his or her racial heritage—is made in the image of God.

We learn more about what being in God’s image means when Jesus says that anyone who has seen him has seen the Father (John 14:9) and when Paul calls Jesus the “the image of the invisible God” (Colossians 1:15). We know almost nothing about what Jesus looked like physically. We can guess from where Jesus came from and the culture he lived in that he had brown skin and a beard. (People have often painted pictures of Jesus with pale skin, like mine, but that’s not accurate.)

We also have a little hint from a prophecy in the book of Isaiah that Jesus wasn’t especially good-looking (Isaiah 53:2). But while we don’t know much about Jesus’s body, we know a lot about his character: how he lived, how he thought, and what he said and did. All these things give us glimpses of what God is like and how we too might image him.

None of us image God perfectly—as Jesus did—because he is holy and we are all messed up with sin. But we are all made in God’s image. It doesn’t matter how young or old we are, if we do really well in school or if we have a learning disability, if we are able bodied or unable to walk or talk or see, if we’re male or female, if we’re black or white or Asian or Hispanic or Native American or a beautiful mix of different racial backgrounds. We’re all made in God’s image.

So Jesus invented diversity, by creating people with all sorts of different bodies and minds, but he also invented equality, because we are all equally made in God’s image. When people look down on others because of their racial background or body type or mental ability, they’re going against God’s plan and they’re not listening to what the Bible says.

Here are all the chapter titles from Rebecca’s book:

This blog post was taken from 10 Questions Every Teen Should Ask (and Answer) about Christianity by Rebecca McLaughlin, ©2021. Used by permission of Crossway.

Rebecca McLaughlin holds a PhD in renaissance literature from Cambridge University and a theology degree from Oak Hill College in London. She is the cofounder of Vocable Communications and the author of Confronting Christianity, named Christianity Today‘s 2020 Beautiful Orthodoxy Book of the Year.