As the days continue to speed by, this month’s letter to all of you is more of a deep dive into what I’m learning in my online class at Dallas Theological Seminary.

But first here are two of my favorite photos from the Love Like You Mean It cruise we went on earlier this month. The first is with an Ethiopian-American couple who live in the DC area with their four kids. They have loved learning about marriage and family from our ministry so it was a treat to spend an evening with them. The second is a rainbow out our cabin windows which was gorgeous to see and so meaningful to be reminded of God’s love for us. 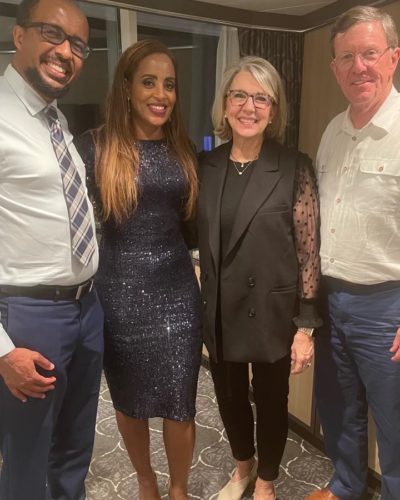 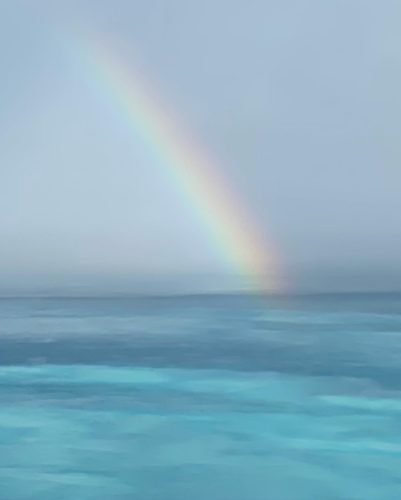 My class this semester is on the history of doctrine, which sounds terribly boring and dry, but what I’m learning is compelling and truly important to believers today. So stick with me for a few minutes and marvel that God has managed through broken sinful humans to keep the truth of His Word and His character pure and clear for generations.

This month I learned why the Church, meaning the universal body of believers around the world, wrote and adopted creeds and statements of belief. The story goes like this:

In the days, months and early years after Jesus’ ascension and Pentecost, the rapidly growing baby church all believed what they had seen: Jesus was a real human who they saw and touched; He really suffered and died and therefore He had to be God because He rose from the dead. Hundreds were witnesses, so no one questioned it.

The apostle John says it plainly: “That which was from the beginning, which we have heard, which we have seen with our eyes, which we looked upon and have touched with our hands, concerning the word of life—the life was made manifest, and we have seen it, and testify to it and proclaim to you the eternal life …” (1 John 1:1-2).

It wasn’t just the 12 who saw and touched Him! Paul records that Jesus appeared in His resurrected body to over 500 believers at one time, and who knows how many others saw Him at other times that weren’t recorded.

But eventually new converts began asking questions no one had asked before. And so those first-generation disciples—like Ignatius of Antioch in Syria, a disciple of the Apostle John—began to write explanations for why we believe Jesus is God, who existed eternally with the Father.

Okay, pause on this one. Can you even imagine what it would have been like to be a disciple of John? The real John of the Bible who saw Jesus transfigured on the mountain and saw Moses and Elijah! And how did he know the two who showed up with Jesus were Moses and Elijah? And John was in the boat when Jesus calmed the storm, when Peter walked on water, when Jesus fed 5,000 people … John saw it all. Literally. If I was discipled by John, I would have a thousand questions. And I would have believed everything he said.

Back to the story. From those early days to today, we believers need words to communicate our faith to others. As a result, creeds (or statements of faith) were written for the purpose of uniting the church in our beliefs about God. 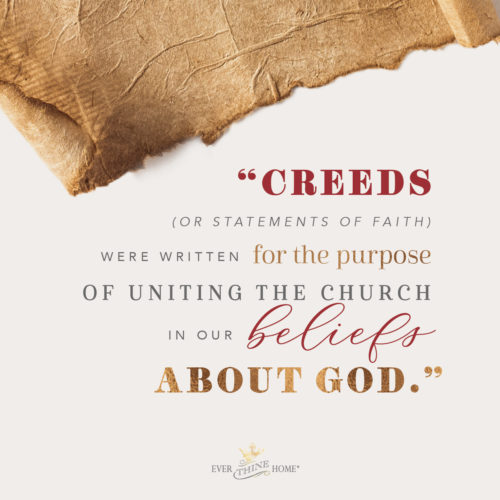 Jesus prayed before He was arrested in the Garden of Gethsemane that God would keep us and that we would be one even as He and the Father are one. When the body of Christ all believe the same truths, we are united in our faith even if we practice our beliefs very differently. 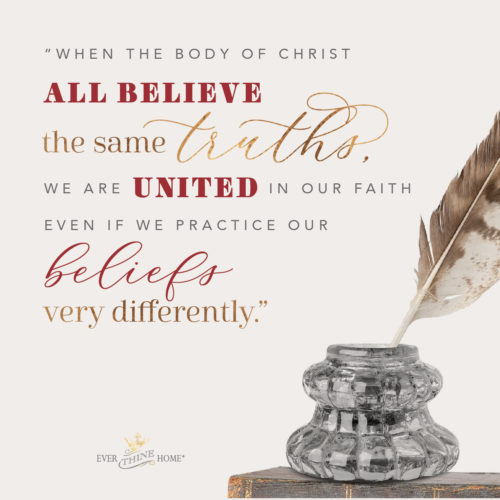 This month one of the concepts we studied was the Trinity, which is present throughout the Scriptures, even though the word trinity is not in the Bible but was coined to explain our three-in-one God. For example, when Jesus instructed His disciples to “baptize them in the name of the Father, the Son and the Holy Spirit” (Matthew 28:19), He clearly listed all three members of the Godhead in equality. Nowhere is the deity of Christ or the Holy Spirit denied in the Bible. Thus the concept of the Trinity is clearly revealed in Scripture and the church Fathers defined it for us.

Concepts like the Trinity were eventually worked into creeds or statements of faith. Perhaps your church, as did mine growing up, recites one of these creeds during Sunday morning worship. The Methodist church, even with its increasing drift toward liberalism, still recites the Apostles Creed every Sunday. I was so surprised and interested to learn the earliest form of what became the Apostles Creed was first written in Rome and called the Old Roman Symbol. This was sometime between 200-300 A.D. It was a statement all new Christians memorized and stated before baptism.

The final wording of the Apostles Creed was adopted in the fifth century and has remained unchanged since. Which is truly remarkable … that almost two thousand years later churches worldwide are still professing the same beliefs, the same creeds as did those in the ancient church. Others from that era are Nicene Creed written in 325 A.D. which established the equality and unity of the Father and the Son; and the Constantinople Creed from 381 A.D. and the Chalcedonian Creed in 451 A.D., both of which added sentences declaring the deity of the Holy Spirit.

Following these there was no change in our major creeds for over a thousand years. Another remarkable providence of God.

If you are like me, you’ve never seen some of the lesser-known creeds unless your church repeats them or you learned them in a catechism class as a child. So at the end of this letter I’ve had our designer Julie create a few of them for you to print and keep to read for a quiet time or a prayer. The words are beautiful and inspiring and worthy of our attention since they are reflections of the God we serve and love.

Two weeks ago we had ice and snow and now the early daffodils are blooming! Such is the on again, off again nature of this season. As I type this a front has blown through and the temps dropped from the low 60s this morning to the low 40s now with lows tonight in the 20s. My desk is built below a window in our laundry room and the cold air blows through the cracks around the window so I need a cozy blanket to stay warm. I love the changing seasons.

I hope you will enjoy reading these beautifully written creeds of the faith and that you will join me in giving thanks for the wonder of God’s work through the ages.

Till next time in March! 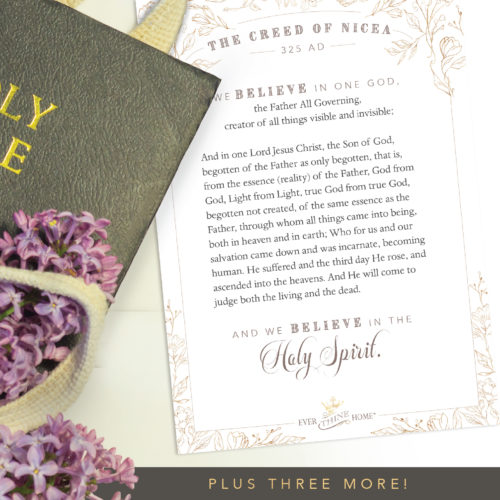