Dear Barbara: What If My Husband and I Fight All the Time? 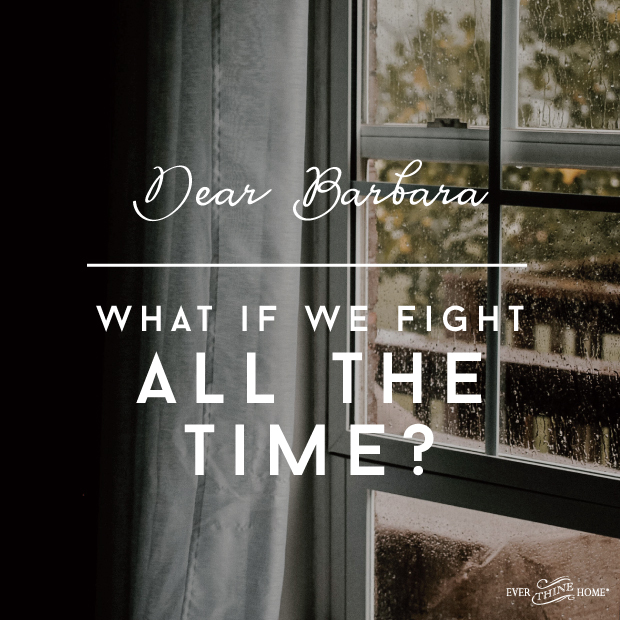 Dear Barbara — “What if we fight all the time? It seems like that’s all we ever do anymore: nitpick about everything, look for the worst in each other, and are ready to duke it out daily. What can we do?”

First, let me assure you: you’re not alone! Earlier this month on September 2, Dennis and I celebrated our 46th anniversary and instead of marriage being finally easier, and it is in many ways, it’s still full of adjustments as we enter a new season of life, both of us feeling anxious and unsure about what’s ahead.

While I know that makes us sound ancient and possibly unrelatable, we still disagree, nitpick like you said, and experience disappointment with one another because we are different. Though we have many shared values in our relationship, not all of our values are identical. Conflict can easily result from clashing values.

Every couple who has walked the aisle and said, “I do,” has done so with assumptions about their life together that almost always lead to some level of disappointment. One writer said, “He thinks his bride is wonderful and hopes she will never change; she thinks her groom will happily make some changes for her. Both discover disappointment instead.” So true isn’t it?

My daughter Rebecca, like all of our married kids, has experienced this clash of values hundreds of times in her ten years of marriage. One situation that took a long time to resolve involved bedtimes for their kids.  Rebecca wanted the kids to go to bed early to get a good night’s rest and be ready for the next day. Jake, though, arrived home in the evening after a long day of work and out of a sincere desire to still make time for his kids, he wanted to keep them up to wrestle and play and get his dad time in.

After months of repetitive arguments and frequent conversations, Rebecca and Jake began to discover underlying values that were at work in their choices. For Rebecca, it wasn’t just about keeping a schedule; she also desired one on one time with Jake and she wanted some alone time for herself.

Jake, in turn, began to understand the repercussions keeping the kids up late had on Rebecca the following day. He got up early and headed to work but left grouchy tired kids behind that Rebecca had to deal with for the day.

Neither spouse was wrong. Neither desired outcome was wrong. After seemingly endless conversations over what felt like a major disagreement at the time, they both acknowledged one another’s needs and preferences and found a way to compromise.

Communication is essential in every marriage, especially if you feel you are fighting all the time. Healthy fighting isn’t fun; it’s so much wrestling through the arguments over and over with the shared and understood purpose to decide what’s best for your family. It takes a lot of time, a lot of discussion, a lot of listening to get there and none of those are easy, but it’s always worth it in the end.

The goal in marriage is onenesss, which isn’t found without conflict. Nor does oneness happen as quickly as we’d like. It also doesn’t always mean 100% agreement on everything. Endless conversations and a teachable heart are the pathway to the unity we desired when we first said our vows.

For Dennis and me, we hoped that we’d finally get to a place where we agreed on everything. I thought that was what happened after this many married years, but we are still fundamentally two very different people who approach life from two unique vantage points…and that’s good. It’s what makes marriage healthy. It’s what keeps us praying for our hearts to be in line with God’s heart so that our different values don’t become something we insist on selfishly.

We experienced a similar kid-focused conflict as Rebecca and Jake, and a thousand others besides, by the way. When one of our children was a teenager, Dennis wanted to be firmer in discipline than I, but after many conversations he gave in and agreed to follow my mother’s heart to empathize in this particular situation. Complicating the parenting challenges for you, as it did for us, is the need to parent each child with unique approaches; it’s never a one size fits all formula.

How you raise your children will be fraught with disagreements from cradle to college. That’s why praying for the Holy Spirit’s clear leading is so important! There may not be a right or wrong way, but there is a way that God has designed with your family’s best in mind.

So remember the goal. It’s not about who’s right and who’s wrong. It’s about coming to a place of oneness, a place of as much agreement as you can find. Table the other parts of the conversation that still need to be sorted through and agree to move forward on what you are united on.

When our kids became teenagers, Dennis and I started scheduling an every Sunday night date night that became a meeting of the Rainey family corporate officers.When the kids were little we had conversation time after the kids were in bed, but teens stay up as late or later than Mom and Dad so we were desperate for one-on-one conversations.

Our few hours away each week wasn’t romantic whispering in each other’s ears; it was a business meeting. Even though no flowers were involved, these dates spoke so much value to me as a wife and mom. Dennis recognized my need to talk about all I was experiencing at home. I felt appreciated and heard, which I rarely felt from my kids.

My kind husband would listen to me talk and talk and talk every week, and he’d commit to help me work through our family issues together. That was where he began to grow even more in understanding my load with the kids and where I began to appreciate his responsibility to lead well that he took seriously.  All the interruptions of daily life make husband-wife talking a challenge, but having a regular date each week gave me hope that I could not just finish sentences but get perspective from my partner, my best friend and the one who was committed to doing life with me.

No matter what you’re fighting about, if it feels relentless and ongoing it’s time to take action. If you can’t do a date night every week, then find another way to invest in your marriage. Dear friends of ours made a commitment early in their marriage to do something to invest in their relationship every year. They either read a book, went to a conference, or participated in a marriage study. Would one of these ideas work for you?

Once you stop investing in your marriage, it starts unraveling. So don’t stop. Find a way that fits for you to commit to investing again.

But the real question is how can you not?

11 thoughts on “Dear Barbara: What If My Husband and I Fight All the Time?”