Note from Barbara: This is the first in a series of posts taken from my book, Growing Together in Truth. These stories are designed to read individually or as a family. May you and your family always live according to God’s truth. And may your knowledge of the truth lead each of you to actions that will bring much good to the world in which we live.

In 1914, twenty-seven men boarded the ship Endurance under the command of Ernest Shackleton, bound for the frozen continent of Antarctica. This was Shackleton’s second journey to Antarctica; he knew what to expect. Or so he thought.

Five months later and only one day from their destination, the temperatures dropped dramatically. The sea became solid ice and they were stranded for the winter. Six months later—all without sunshine—the men had survived, but their ship had not. Slowly it had been crushed by the icepack, and it finally sank.

The men stripped the Endurance of her rigging and sails, provisions and, most importantly, her three wooden lifeboats. When the ship sank, they began walking slowly, day after day, hauling their supplies and salvaged hopes of survival across the frozen sea. Finally, in April 1916, with the ice beginning to thaw, they spotted Elephant Island and were able to row to land. After 497 days, they were on terra firma again. But the island was uninhabited; they were still lost.

Leaving 22 men behind, Shackleton set sail with five others in one of the lifeboats. They headed for South Georgia Island, 750 miles away, with only a sextant (an instrument for measuring latitude and longitude) to guide them. Accurate readings of the sextant were critical. A mistake of only one degree could take them off course by hundreds of miles. But they trusted the sextant and it guided them safely to their destination. A rescue from South Georgia Island was launched, and not one man from the Endurance perished.

Years later a little girl was lost in a sea of concrete at 25th and Diamond Streets. She knew how to find her way home; her problem was she couldn’t find her way out. The intersection of those streets in inner-city Philadelphia was the hub of the projects.  Gang infested and crime ridden, it was as unsafe for a little girl as the frozen ocean had been for the crew of the Endurance.

Karen remembers stepping over broken glass and smelling the stench of urine as she would climb the stairs to her apartment after school. Once inside, her home felt like a cage because of the metal fencing that closed off the small patio opening. She was in charge of her little brother because her mother was usually at work. Karen was only seven.

One year later, her mom got married and they moved from the projects to a suburb. Though her mother didn’t go to church, she insisted that her children attend. So Karen took her brother and walked to the church down the street every Sunday. There Mrs. Green—always dressed in a hat, gloves, and a fine dress—taught Karen’s Sunday school class. Little Karen heard words of truth and hope.

For Karen, church was an escape from the tension at home between her mom and stepfather, who seemed to fight all the time. In fact, all Karen had seen of family life was women marrying  young, divorcing young, and then moving on to the next man. But the people who taught the Bible at her church modeled family stability, and Karen wanted that. 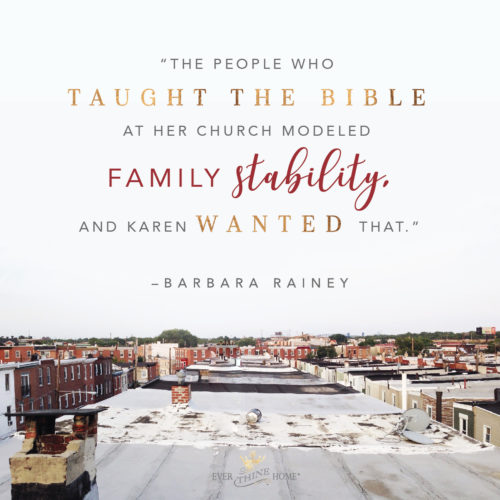 During the summer of her 14th birthday, Karen decided to follow God’s plan for her life. She heard the words of John 3:16: “For God so loved the world, that He gave His only begotten Son, that whoever believes in Him shall not perish, but have eternal life.”

Karen recalls, “To know that God loved me, that His Son was a free gift for me, brought great security. I felt so loved, understanding that God wanted me, that I could go to heaven, that there was a place for me. I’d been in and out of a lot of different houses over my life, so this promise of a secure place where I could belong forever was my way out of an unhappy childhood.”

Karen found her sextant, the truth of the Bible.

In college Karen fell in love with a young man named Crawford who came from a fine family. Before she walked down the aisle in marriage, her grandmother whispered, “Karen, if it doesn’t work out, you can always come home to me.” The first year of marriage was very hard. She was tempted to run back to her grandma, but Karen had told God she wanted to live His way. She was committed to finding answers in the Bible, not her grandma’s house.

God rescued Karen because she trusted God’s truth to guide her just as Shackleton trusted the sextant to guide him. She believed His Word would set her free to live a better life, and it did. 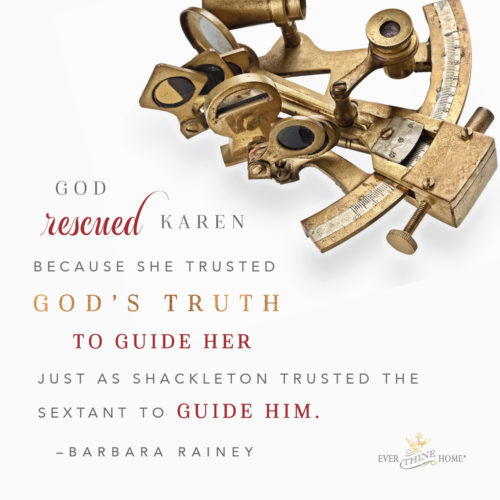 “If you abide in my word, you are truly my disciples, and you will know the truth, and the truth will set you free.” John 8:31-32

The Bible says that Jesus Christ is “the same yesterday and today and forever” (Hebrews 13:8. Even though people will change, God never changes. His Word is our GPS.

God, You have always been the Deliverer. As You delivered Moses and the people of Israel from bondage, still today You are able to deliver all who call on You, to set their feet on solid ground and to set them free. You rescue those who are lost. Teach me to follow You closely that I may not trust my own way but only Yours. Amen. 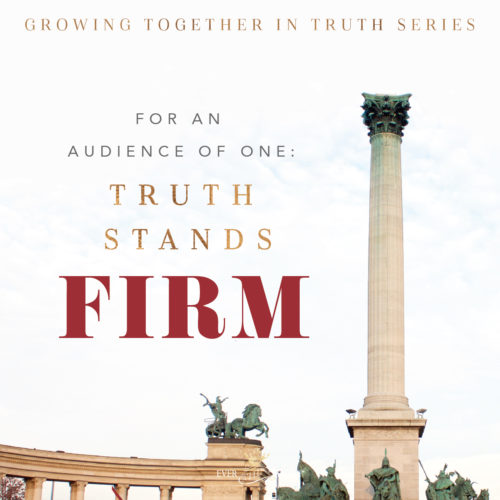 2 thoughts on “Lost and Found: Truth Shows the Way”