In the Days After Easter 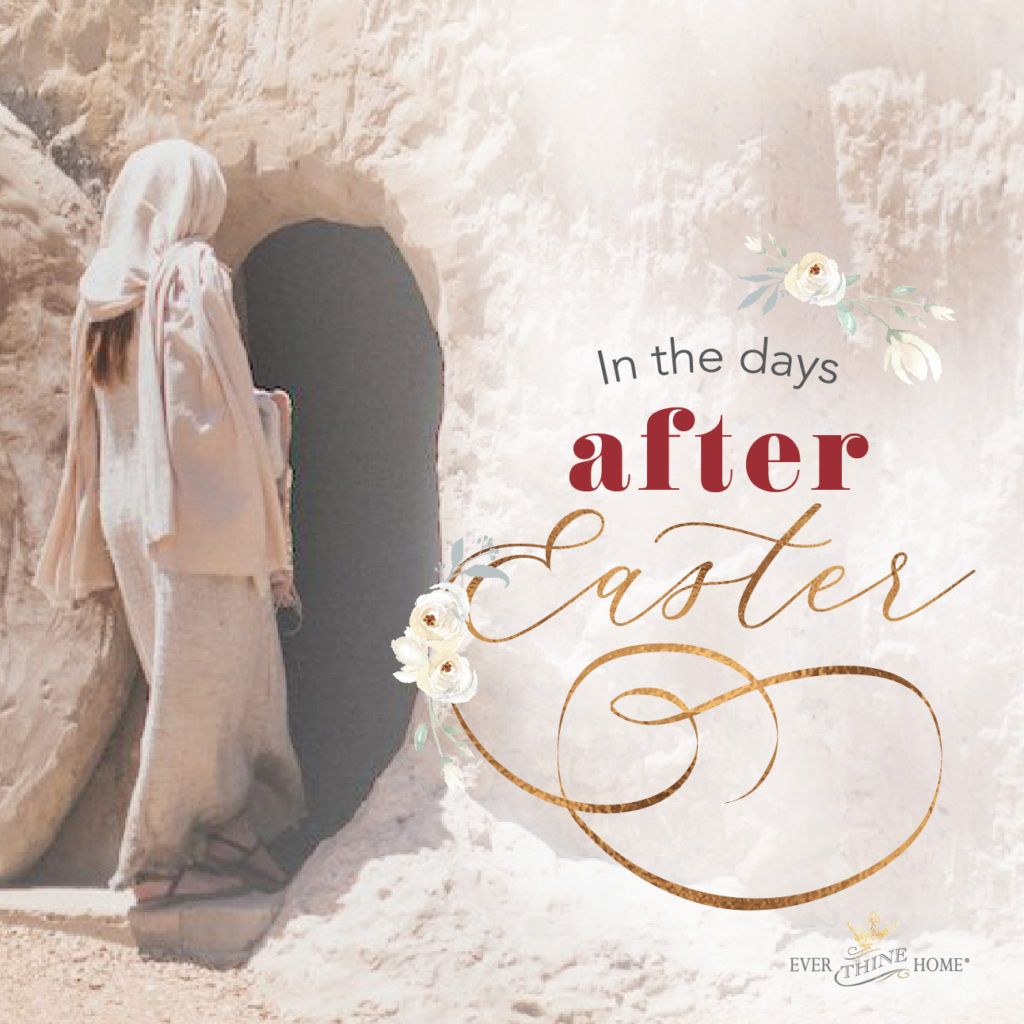 Yesterday we marked the anniversary of the most miraculous moment since the dawn of time. Today, though, are we changed by the remembrance?

Or are you like Martha this Monday morning … already moving on from the anniversary of the Resurrection to your to-do list?

All humans tend to see more clearly in reverse; hindsight is 20/20, we say. Small details, words quickly forgotten, and missed clues sometimes become brilliantly obvious when we look back. “Easter morning is the turning point of world history” said Trevin Wax, so let’s not leave the scene too quickly. 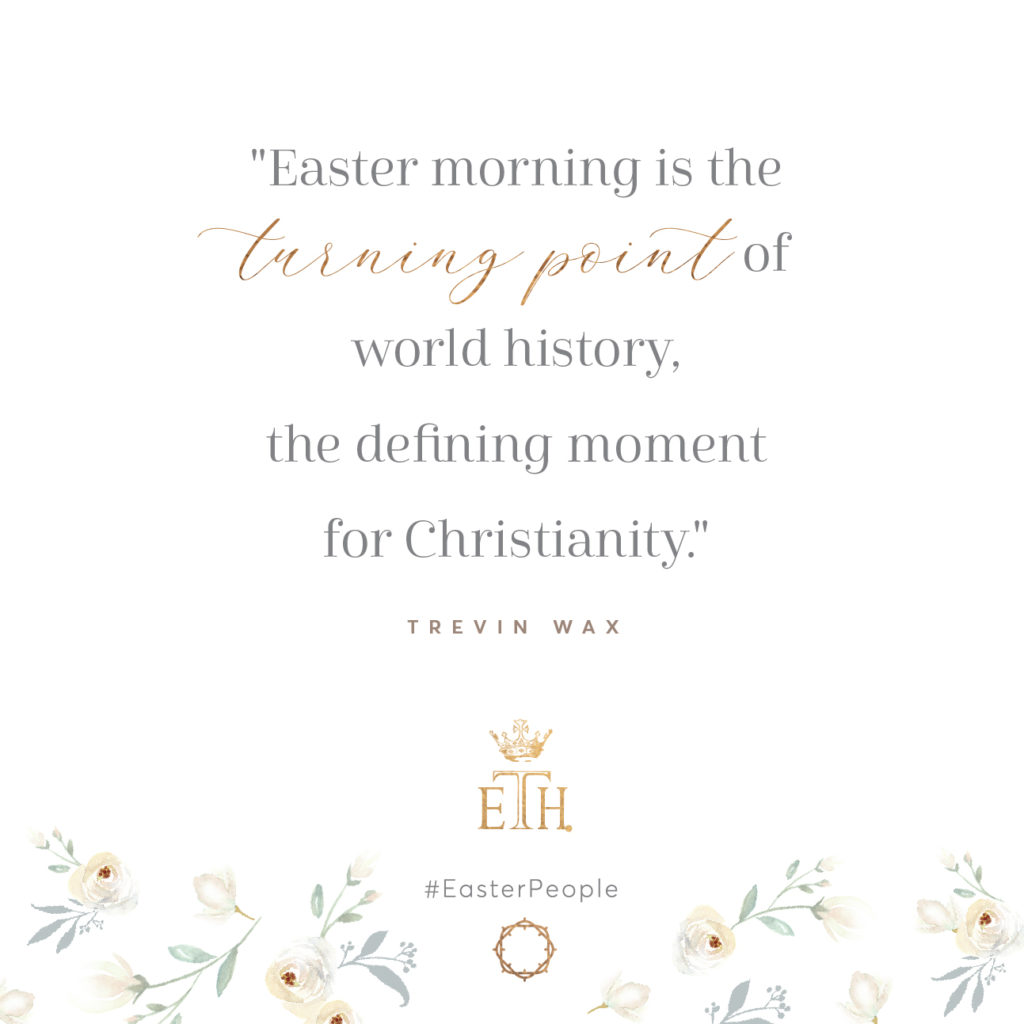 I invite you to look back with me for a few minutes. Let’s gaze at a few details from Resurrection’s dawn with the clarity of hindsight and the Spirit’s illumination.

As the sun crested the horizon on the first Easter morn, its warmth touched a group of women gathered in the morning’s chill beside a stone tomb. The four Gospels name them, which is most interesting for that era and therefore most important to the Author: Mary Magdalene; Mary, the mother of James; the other Mary; Salome; Joanna; the women from Galilee, and other women.

But … why were no men present?

Was it typically the woman’s duty to care for the bodies of the departed? Or were the men kept away by the facts—Jesus was dead and everyone knows death is final. End of story.

Again, why? What has God created specifically in women that drove this group to the tomb that Sunday morning “that they might anoint Him” (Mark 16:1-2). I imagine a couple of these women had volunteered to do the traditional anointing but others asked, “Can I come with you” as women often do to share our sorrows and joys.

Jesus was like family, and women are devoted to their families. We believe the best about those they love, and we like the companionship of laboring together. So these women went to be near the One they loved.

Have you been willing to go near to God even when He seemed dead … silent … unresponsive to you?

Because these women dared to go near …

… they were the very first to discover the tomb was empty (John 20:1).

Here at the tomb we see Jesus honor His female disciples who were quick to recognize and believe the impossible. He gave them the first sighting of His resurrected life! Their eager, welcoming faith was abundantly rewarded.

After hearing the women’s unbelievable report, only two men were curious enough to run and see for themselves. Peter and John hurried to the tomb. John “saw and believed,” he wrote in John 20:8. Later, Jesus rebuked the other disciples as group for not believing the report of these faithful women. Mark 16:14 says, “He rebuked them for their unbelief and hardness of heart.”

What can we learn for today from these brief glimpses into the scene of that morning miracle?

1. Belief in God is supremely important to Him. Though we waver often between belief and unbelief Easter reminds us to always lean toward belief even if we feel crazy doing so.

2. God likes it when we choose to go to Him, to be near Him. James 4:8 tells us, “Draw near to God, and He will draw near to you.” Will you take steps toward Him? He rewarded the women, so be confident your turning to Him will not go unnoticed. Trust Him for how He chooses to respond to you knowing His ways are always best.

3. The end of the story is never the end. You may be facing a dead end in your life, but the Resurrection is a reminder that God knows how to raise the dead.

4. The empty tomb reminds us nothing is too hard for God. Choose to believe God even with impossible situations and people. Don’t let facts keep you distant when you can go near to Him. (Be sure to read my recent post on “When Life Seems Impossible, Can God Still Work?”)

One last question for today: Are you open to remaining stunned by this incomprehensible miracle? How can you remain awed by Jesus?

Many of us will have situations today or soon that will offer a choice: We can believe that God “is able” (Hebrews 2:18; 7:25) because of what He did yesterday, or we can respond like many in the Gospels who refused to believe, would not believe, or thought the resurrection nonsense.

Will you be quick to believe? Choosing to believe keeps the door open to what God wants to do. This is one way we remain awed by Jesus

Will you let the wonder and miracles of the Resurrection influence your life every day this week? Will you resist the pull to return to normal living? This is also how we live in the wonder of the resurrection; resisting the tinsel and temptations of the world and keeping our souls satisfied by Christ alone.

For me today and always, I want my life to be characterized by wonder that my God has conquered death and therefore my small problems and difficulties are nothing He cannot also conquer. I want His victory over death to mark my life every day with wonder, great joy, and a faith that marvels even as I wait imperfectly to join His Resurrection.

Today God’s word says to us, “Arise, shine, for your light has come, and the glory of the Lord has risen upon you” (Isaiah 60:1). 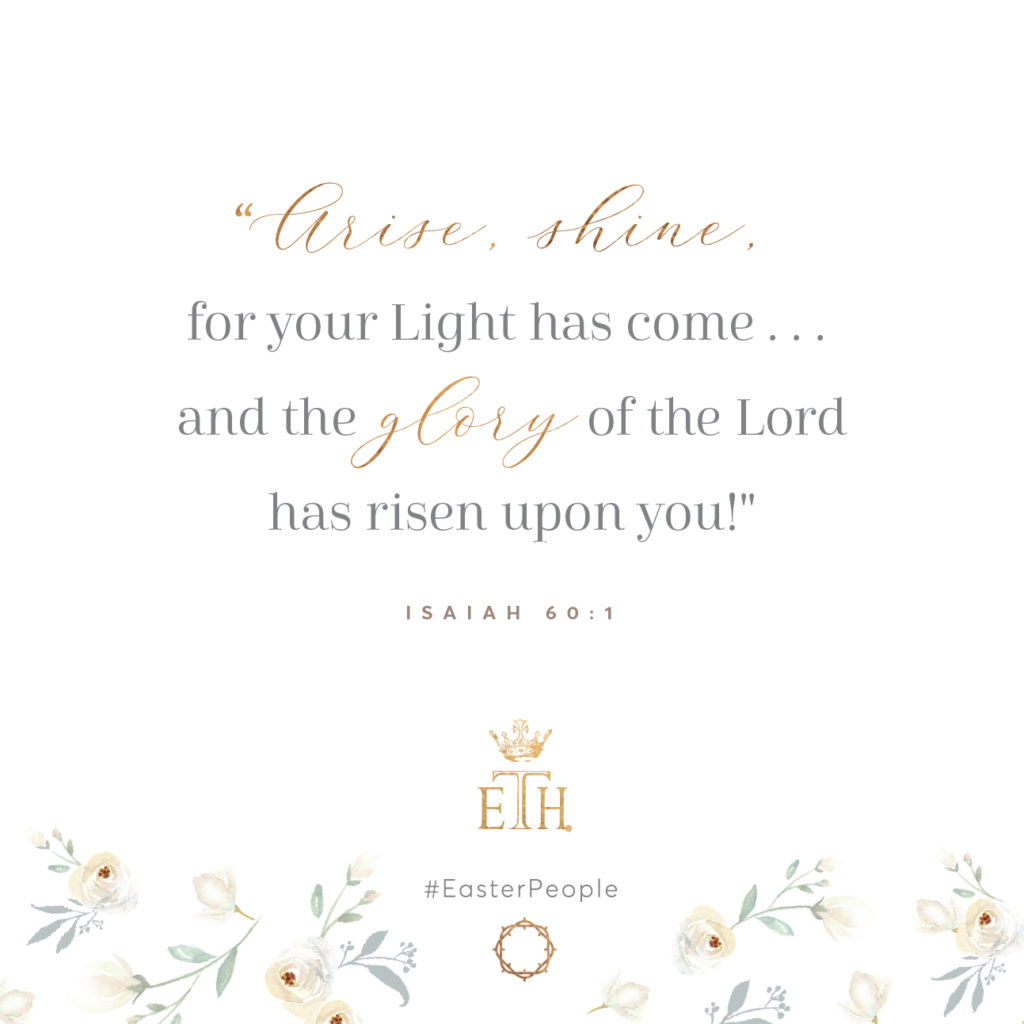 He is risen indeed!!!

If you enjoyed this, check out some other post-Easter thoughts from Barbara:

4 thoughts on “In the Days After Easter”