Becoming a More Grateful Woman, and Teaching Children to Give Thanks Too (Part Three) 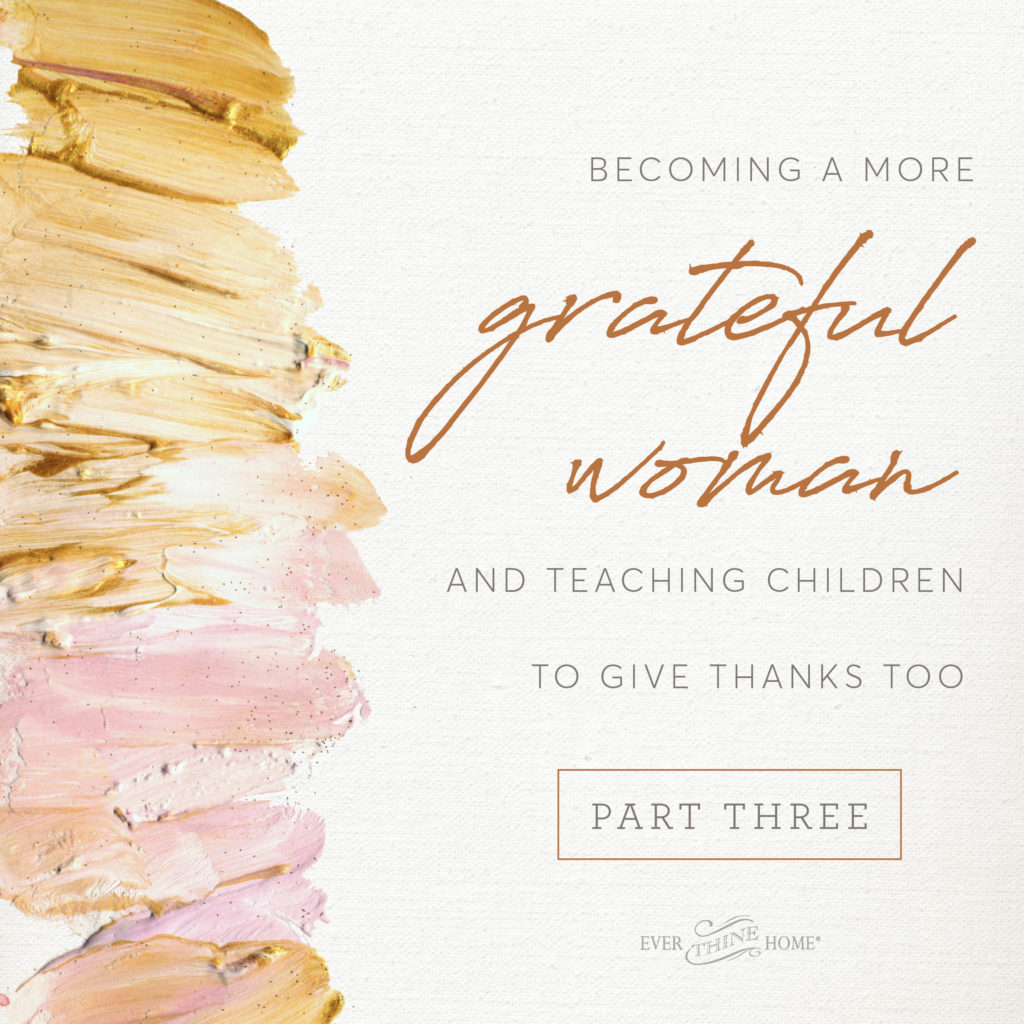 It’s obvious to every mom, every teacher, every grandparent that gratitude is not natural in children. It is an attitude that must be modeled, taught, and nurtured. Our family’s travels to impoverished places in other countries glaringly revealed our lack of gratitude for all we have in the United States. Prosperity breeds entitlement not thanksgiving.

The honest truth is kids aren’t the only ones who have a problem with ungratefulness and complaining. I too do not always “give thanks in all circumstances,” (1 Thessalonians 5:18). You too?

Growing a heart which says “thank You, God,” and teaching children to express the same is essential for a life of surrender to Christ. To have grateful children means I have to be a grateful woman.

If you missed the previous stories on gratitude, click here to read part 1 and part 2…

William Bradford, the governor of Plymouth Colony in New England, suffered great loss in his childhood. When he was sixteen months old, his father died; he never knew the man for whom he was named. At the age of four, after his mother remarried, young William was sent away to live with his grandfather. Two years later, his grandfather died and he returned to live with his mother and stepfather. The greatest loss of his young life occurred a year later when his mother also died.

(If you are reading this to children, ask them to tell how they would feel if they were William.)

In his long illness we finally see a glimmer of hope that God was indeed in control. Because William was unable to do manual labor, he was allowed to learn to read and write—skills that very few commoners were able to acquire in the 1600s. William likely received his education from a local minister.

Though his sickness left him frail and weak, by the age of twelve he had read many books from the pastor’s library, which of course included the Bible and books such as Foxe’s Book of Martyrs. God’s providence—that He was providing William’s training and preparing him for his future—is clear to us now, though it was not  so obvious at the time.

William’s Bible reading drew him to God but also left him with questions. As a teenager, he was invited by a friend to attend another church in a nearby town. It was, however, a church that was viewed as opposing the Queen of England and was therefore controversial. This church believed in teaching the true Word of God as man’s authority.

In spite of his uncles’ strong objections, William chose to walk many miles each Sunday to attend this church. There he met Mr. Brewster who mentored him in the faith and became like a father to him. Years later in 1620, Mr. Brewster joined William Bradford on the journey to the new world aboard the Mayflower.

God allowed William Bradford to endure a life of trial because in His providence God was preparing William for his future calling. That calling included leading the colonists of Plymouth as they journeyed over the Atlantic to the new world and then serving as their governor for over thirty years.

Here is a prayer like the ones prayed by William Bradford and the Puritans who sailed on the Mayflower. Some of the words sound different from those we use in our prayers today, but sometimes it is good to pray using words written by someone else. This helps us think about God in different terms.

I accept thy Word,

I submit to thy will,

I rely on thy promises,

I trust thy providence.

And may I ever give you thanks.

Providence has been described as “the evidence that God has not left this planet alone in the vast universe or forgotten for a moment the human situation. God visits, touches, communicates, controls, and intervenes, coming before and between man and his needs. Providence is the basis for thankfulness.”[ii]

Can you believe that God is providentially working in your life and your circumstances?Give thanks today for what God has allowed in your life that may not make sense to you now. He is not asleep. He has a plan for your life. Will you choose to believe that He is at work?

5 thoughts on “Becoming a More Grateful Woman, and Teaching Children to Give Thanks Too (Part Three)”